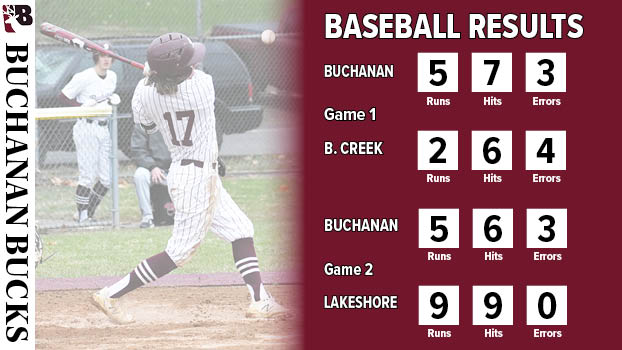 STEVENSVILLE — The No. 2-ranked Buchanan baseball team split a pair of games at the Lakeshore Invitational Saturday.

The Bucks (9-2) defeated Battle Creek United 5-2 in the first game, but were defeated by the No. 13-ranked host Lancers, 9-5, in the championship game.

Against the Lancers, West had two hits and four RBIs, while Nick Finn had two hits. Drew Glavin started and took the loss for Buchanan. West worked two innings in the hill for the Bucks.

In the championship game, the host Lancers knocked off Edwardsburg 11-3.

Against Chelsea, Samantha Baker went 4-for-5 with an RBI for Edwardsburg. Emma Denison was 3-fo-5, while Lindsey Dalenberg was 3-for-3 with a double and an RBI. Denison struck out 11 in earning the victory.

Avery Markel earned the win in the circle for Edwardsburg.

In the Crown Point contest, Lindsey Dalenberg was 3-for-4 for the Eddies, while Sydney Klaer was 2-for-3 with a double, a home run and three RBIs. Lani Hardin also had a home run.

The Eddies were limited to five hits by Lakeshore’s Avery Arwood.

Caitlin Tighe had a home run for Edwardsburg.

The Bobcats were 1-0-1 at the Mendon Tournament Saturday.

The host Hornets defeated Brandywine 13-3 in the opening game. Chloe Parker was 2-for-3 with a home and an RBI for the Bobcats. Paige Krishner also had two hits, including a double, and drove in two runs.

Brandywine and Quincy were tied at 3-3 after six innings when weather suspended the contest.

Krishner and Parker both doubled for the Bobcats.

Parker doubled and tripled for the Bobcats. Adelyn Drotoz also had a double. Presley Gogley was the winning pitcher as she tossed a one-hit shutout.