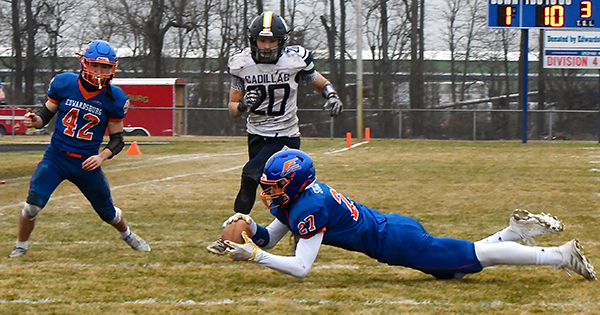 EDWARDSBURG — Unranked Cadillac staved off a late rally to upset No. 1-ranked Edwardsburg in the Division 4 state semifinals at Leo Hoffman Field on Saturday.

The Eagles (8-2) used its outstanding size on the offensive and defensive lines to dominate the Eddies like they have not been dominated in quite some time.

But in the end, Cadillac, which led 28-14 in the fourth quarter, had to withstand an Edwardsburg comeback, including a 2-point conversion with 54.1 seconds remaining to hang on for a 28-26 victory in its first-ever semifinal appearance.

With the win, the Eagles will take on Detroit Country Day in the Division 2 title game at 7:30 p.m. at Detroit’s Ford Field on Friday night.

Using its veer offense, which resembled the one that Dowagiac ran under former coach Mike Stanger, Cadillac was able to outgain the Eddies on the ground, 258-257. Eagles’ quarterback Aden Gurden threw for an additional 66 yards as Cadillac outgained Edwardsburg 324-273. Gurden also rushed for a pair of touchdowns. Kaleb McKinley led the Eagles with 77 yards rushing and two touchdowns.

Edwardsburg was forced to play without Division 4 All-State linebacker Drew Bidwell, who is also one of the Eddies’ top running backs. It was the second straight season Bidwell missed the final game of the season. No reason was given for Bidwell missing Saturday’s game. He was injured in 2019 when Edwardsburg lost to DeWitt 35-14 in the regional final.

Gurden got the Eagles into the end zone first as he capped their drive with a 1-yard run. After the 2-point conversion failed, Cadillac led 6-0. It was the lone score of the opening quarter.

The Eddies (9-1) would come to life after the Eagles’ score. Edwardsburg scored back-to-back touchdowns to open up a 14-6 advantage. The second touchdown came with 2:16 left in the first half.

Cadillac would not be denied. The Eagles were able to close the gap to 14-12 with 50 ticks left on the clock as Gurden found the end zone once again, this time from 18 yards out. Cadillac failed on the 2-point conversion, but put itself in a position to challenge Edwardsburg in the second half.

And that is exactly what it did. Cadillac took the second-half kickoff and drove down the field, scoring on a 4-yard McKinley run. This time, McKinley converted the 2-point conversion to make it 20-14 Eagles.

Cadillac was able to extend its advantage to 28-14 as it scored with 8:21 remaining in the game. McKinley found the end zone again on a 1-yard run. He then added his second straight 2-point conversion.

Edwardsburg was anything but done.

The Eddies, who are used to pushing people around, were finally able to do so in the contest’s final eight minutes.

Edwardsburg cut the Cadillac lead to 28-20 on a 1-yard Logan McColley run, his second score of the game. He added a one-yard run in the second quarter. But the 2-point conversion failed, leaving the Eddies down eight points.

After forcing the only punt of the game, Edwardsburg marched down the field again, scoring with 56.1 seconds left on a Jackson Hoover 17-yard run. Edwardsburg failed on the 2-point conversion, which would have tied the game when the Eagles stuffed the run up the middle.

Hoover led the Eddies with 121 yards on 14 carries. Brett Allen added 109 yards, while Ethan Cebra finished with 52 yards and a 37-yard touchdown run.

EDWARDSBURG — A pair of second-half touchdowns led visiting Cadillac to a 28-26 upset of No. 1-ranked Edwardsburg at Leo... read more