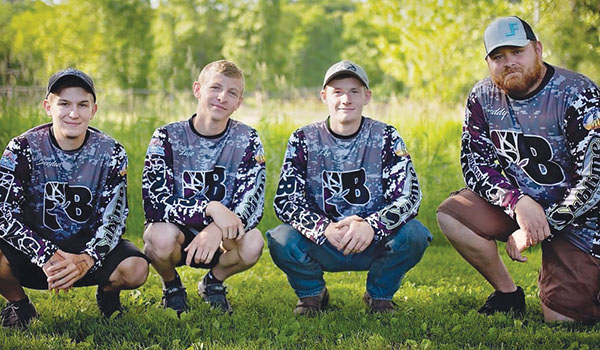 BUCHANAN — When Freddy Canfield was approached by Darrik Anglemyer, a then student at Buchanan High School, to start a bass fishing team, Canfield had a hard time saying no.

Canfield, a graduate of Buchanan and avid fisherman for the past 22 years, has something to prove as Buchanan enters its second season.

While the team is not yet receiving funding from Buchanan High School, the team is working with sponsors and set itself up as a nonprofit organization to help pay for the team’s traveling and registration expenses .

For the first year, Canfield completely self-funded the team with zero help from sponsorships or donations.

This year, after reaching out to Buchanan High School’s Athletic Director Lonnie Hoover Canfield opened a business account through Honor Credit Union. This was approved in late March, giving the team only a month to raise funds before the fifth annual Sports Persons International High School Bass Tournament Series that was held in early May.

“I posted a status on our Facebook page saying, ‘If we don’t raise ‘X’ amount of money, there’s no team,’” Canfield said.

The team also received help in designing new jerseys through Sublime Wear USA, which placed all of their sponsors on the back.

Since the team is not officially run through Buchanan High School, Canfield registered the team as a Michigan non-profit in order to receive larger donations from corporations.

While Buchanan High School is one of the first schools in the area to start a high school anglers club, Canfield said many schools on the shore of Lake Michigan, including Grand Haven, Ferrysburg and Fruitport all have high school teams.

The Michigan B.A.S.S. Nation High School Division hosts its own tournaments, with about 35 to 40 teams competing. Canfield hopes additional funds would allow the team to register more boats.

Just like in other high school sports, if a high school anglers club wins state, the team will get invited to a nationally televised tournament hosted in April.

This year, Canfield, along with Mason Swem and Lane Herrman will be the three coaches and captains of the boats when the team competes in tournaments.

Canfield’s goal is to fill all three of their boats. Last year, the team had four members competing. Canfield said if only four people compete again this year, he will send Swem and Herrman out as captains, while he will remain in charge of the club’s logistics.

Canfield’s goal for this season is to compete in the Michigan Bass Nation, get established as a club, win state and compete in nationals.

“We don’t have to win nationals,” Canfield said. “I want to show Buchanan to all the boys down there, who have probably never heard of us. That would be cool.”

Canfield said he is willing to help Berrien County schools get involved in an anglers club, but dedication is the biggest obstacle. At his job, Canfield switched to the night shift to be able to meet with sponsors during the day and deal with other business regarding the club.

“It’s a lot of work,” Canfield said. “I’ve sacrificed a lot just to get as far as it is, and I don’t plan on stopping.”

Canfield said the team will use spring tournaments to dictate who will compete in the summer tournaments., which can be difficult to plan because of summer vacation.

Another advantage of joining a high school anglers club is scholarship opportunities, Canfield noted. Through the MBN, scholarships are given away each season.

“Down south, it’s even bigger,” Canfield said. “There’s all kinds of opportunities. There really is.”

Canfield said with more funds, the team could attend B.A.S.S tournaments hosted as far out as the Upper Peninsula.

A month ago, the team also hosted a craw fish boil to get out into the community and spread the word about the team. Although one team member has since graduated, Canfield is excited to get started again.

“We had a pretty solid team this year,” Canfield said. “All four of the kids were doing really good. Caden DeWulf, this was his first year chasing bass and he learned so fast.”

For Canfield, he is ready for the team to grow and hopes the school board will officially recognize the team with its approval of donations and funding through the school for tax purposes.

“I’m all about it,” Canfield said. “After I was approached by Anglemyer, I was stoked. I’m not stopping here.”

NILES — RC Sportscasting has announced that in addition to broadcasting Brandywine football games that it will also cover Niles... read more