Buchanan a finalist once again 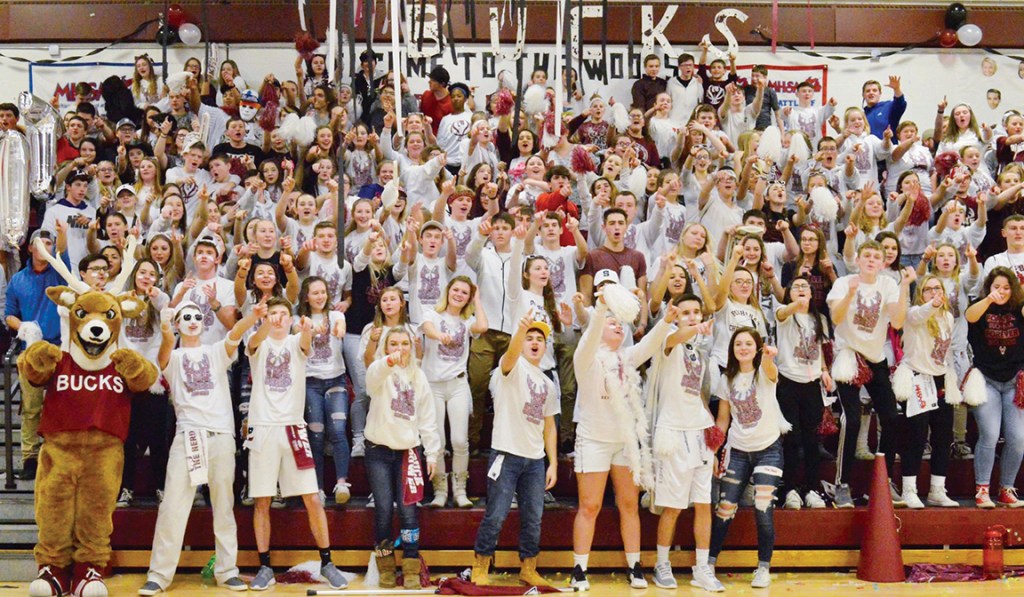 Defending Battle of the Fans champion Buchanan is once again a finalist for the spirit award. (Leader photo/Courtesy The Herd)

EAST LANSING — The reigning champion and two first-time finalists have earned the opportunity to vie for the Michigan High School Athletic Association’s “Battle of the Fans VIII” championship recognizing the top high school student cheering section in Michigan, as awarded by the MHSAA’s Student Advisory Council.

Buchanan, North Muskegon and Saginaw Heritage were selected as finalists by the Advisory Council from a group of nine semifinalists that took part in a series of social media challenges highlighting their sections over the last two weeks.

The winner will be selected by another vote by the 16-member Advisory Council, with consideration given to a public vote on the MHSAA’s social media sites. This year’s winner will be announced Feb. 22 and recognized March 15 at the Breslin Center.

Buchanan is seeking its second straight BOTF championship and also won in 2013 and was a finalist in both 2014 and 2015. North Muskegon and Heritage are both first-time finalists; this was the second time North Muskegon applied for BOTF, and the third time Heritage had applied.

The MHSAA will visit the finalists for the following home basketball games:

“With Heritage from Class A, Buchanan from Class B and North Muskegon from Class C, we’re thrilled to have finalists representing such a wide range of school sizes — and we’re excited to see our three finalists up close and in person,” said Andy Frushour, MHSAA director of brand management and advisor to the Student Advisory Council.

“Buchanan is a perennial power and has become the gold standard for high school student sections. Heritage was very involved during the fall Sportsmanship Summits, and that momentum carried over to this winter as the section has supported its top-ranked girls basketball team. North Muskegon has come out of nowhere — but is proof of how just a little bit of organization can lead to major student section changes over only a few months.”

Battle of the Fans is organized by MHSAA staff and the Student Advisory Council. For the second year under a revamped format, schools were invited throughout the fall to submit short videos, via YouTube, of their cheering sections in action. The Advisory Council then selected nine semifinalists to accomplish a list of tasks showing off their sections over a 12-day span.

Semifinalists were required to complete 10 challenges via their social media channels. Five mandatory challenges focused on contest criteria: positive sportsmanship, student body participation, school spirit, originality of cheers, organization of the group, student section leadership and overall fun. Semifinalists then selected five elective challenges (taken from a list of 15 opportunities). Descriptions of all 20 challenges are available on the MHSAA website at ow.ly/t4hj30niV96

A total of 20 schools applied for this year’s contest — including six first-time applicants. Three semifinalists each were selected from the Class A, Class B and Class C/D applicants.