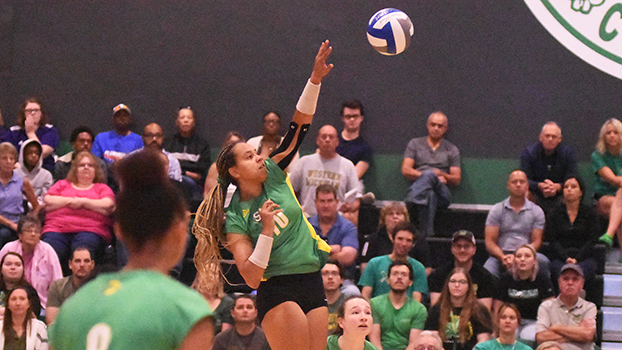 The Roadrunners returned all of its starters to the line up to face Glen Oaks Community College in the final match in the 1st Source Bank Fieldhouse for the 2022 season.

After battling through several injuries over the past few weeks, Southwestern returns to full strength and it paid off as it defeated the visiting Vikings 25-23, 25-17, 21-25 and 25-19.

“Tonight was awesome,” said SMC Coach Jenny Nate. “This is who we are and who can be when we put all the pieces together. It’s been a building process, and we are going to keep fighting and continuing to build one point, one practice, and one match at a time. I’m so proud of this team, and we are excited to hit the gym in preparation to take on Lansing next Tuesday.”

The Roadrunners’ top three leaders in kills were back together as Faith Rankin (Battle Creek/Lakeview) returned to the lineup after missing several matches with an injury. She, along with Bianca Hobson (Kalamazoo/Loy Norrix) and Nikki Nate (Niles) combined for 38 kills and three blocks. Rankin had a team-high 15 kills, with Hobson adding 12 and Nate 11.