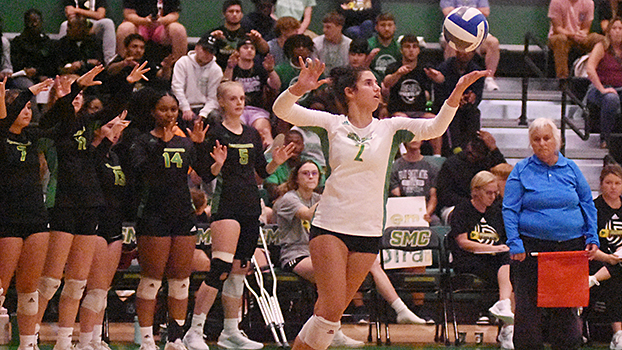 The Roadrunners came away 0-4 against some of the best competition it has faced so far this season. It was that type of competition that SMC Coach Jenny Nate wanted.

“We came to the Raider Challenge for a reason — to get better, tougher, faster, and stronger,” she said. “We knew it would be a challenge and that we would be matched up against some bigger, stronger, faster-established teams and programs, and we knew in order to compete and win, we would be forced to level up.”

“We learned a lot as a team today, and despite a few of the scores, I was pleased with how we made adjustments, stayed focused, and played to win every single point,” Nate said about Saturday’s matches. “We took a couple of hits today, but we will be a much stronger team because of it.”

She said that Sunday was about continuing to grow as a team.

“Today was about progress,” she said. “Our competition today was very tough, just like yesterday, but our set wins and set scores improved overall. We are adding to our offensive strategy and got more of our hitters in the mix and were able to work on new combinations, plays and really add some layers to our game. We also dealt with an injury which forced us to make some lineup changes also, and I was pleased to see us still able to win and keep the scores tight no matter who was on the court.

“We were challenged in various new ways this weekend, and we battled for every point playing to win. We just have to bring these experiences back to our home court tomorrow at practice and use it for fuel to prepare to face Lake Michigan College on Tuesday. I’m proud of our grit and resiliency and the way this team is really learning to cheer for each other in every facet of the game on and off the court.  It’s all going to help us build this team and program.”

The Roadrunners are now 9-10 overall. They host LMC at the 1st Source Bank Fieldhouse at 6:30 p.m. Tuesday. Southwestern is 3-2 in the Michigan Community College Athletic Association Western Conference, while the Red Hawks are 18-6 overall and 5-0 in conference matches.