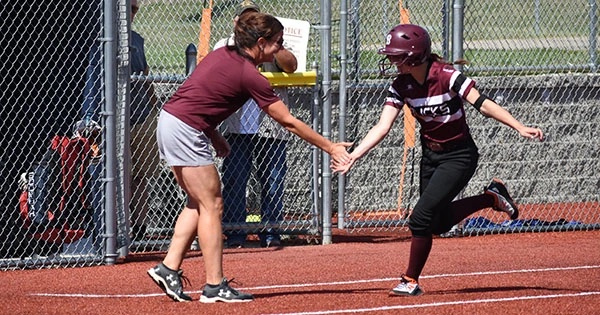 Buchanan. Coach Rachel Carlson believes that changes to the first round of the state tournament could cost teams games. (Leader file photo)

NILES — An expanded schedule for the district round of baseball and softball was approved by the Michigan High School Athletic Association’s Representative Council at its annual winter meeting March 25 in East Lansing.

The approved proposal will allow first-round district games to be played during the week before Memorial Day. Currently, the first-round games are scheduled for the Tuesday following Memorial Day.

The change seeks to take baseball’s pitch count out of the equation. Under the current format, if a pitcher reaches the total number of pitches allowed, he cannot pitch in the district semifinals or finals on Saturday. Softball does not have a pitch count.

The proposal also seeks to help with schedule flexibility. It could mean later district rounds that would allow athletes, especially at smaller schools that have more multi-sport participants, to compete in track and field the following Memorial Day.

“I like the adjustments,” he said. “I feel it gives us all more flexibility, especially in baseball. I like the fact that the MHSAA has been more flexible and proactive to the needs of member schools, which hasn’t always been the case.”

“I think it definitely gives us some opportunities to allow our athletes to help more than one team,” he said. “We have many athletes that participate in multiple sports, so I think this will really be a benefit. It also allows us some flexibility as far as the pitch count goes. It gets tricky with pitch count when you have limited pitchers.”

“I think it’s a great change,” he said. “I haven’t been through it as of yet, but I imagine it frees up a little bit of time, and will take some of the pressure off, with a game being removed from an already chaotic week.”

Dowagiac and Buchanan softball coaches Mike Behnke and Rachel Carlson are not excited about the proposal.

“Not a big deal to me whether it is the Thursday, Friday, or Saturday before Memorial Day or the Tuesday after,” Behnke said. “Doesn’t affect softball too much in my opinion.”

Carlson can see it hurting some teams.

“Change is always difficult, but as long as we know the dates ahead of time, we can plan and prepare accordingly,” she said. “Unfortunately, it could cut the season short for teams that lose the first-round game by more than a week. Some teams will also have to vacate their tournaments that are scheduled over the long weekend as well. Hopefully, it works as it’s intended to help schools with dual athletes.”