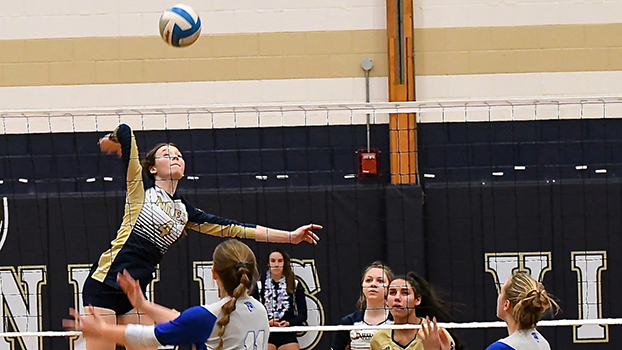 DOWAGIAC — One of the things that former Niles Volleyball Coach Jenny Nate was known for was creating a family atmosphere.

The Roadrunners got a pair of real-life relatives Thursday with the announcement that Niles senior Emma Beckman has signed a National Junior College Athletic Association letter of intent to continue her athletic and academic career at SMC.

She is the cousin of Niles senior Cadence Knight, who signed her letter of intent to play for Nate and the Roadrunners.

“I have had the privilege of being Emma’s high school coach for the past three years, and I am absolutely thrilled that she has signed to continue our volleyball journey together — now at the collegiate level,” she said. “Emma Beckman is one of the most positive, high-energy, kind, talented, ‘always-on’ setters I have ever had the privilege to coach. She is literally always smiling and truly loves the game.

“Her positive attitude is infectious, and when you match that with her offensive and defensive skills, she is an incredible force. Emma has an outstanding court presence, runs an offense, and makes her teammates and everyone around her better because she is on the court. Her excitement for the game and her athletic and academic leadership will make her a key component and part of the fire that will run our SMC team and help create the type of culture we are working to build.”

Beckman’s 2021 season statistics were 167 kills, 307 digs, 594 assists, 48 blocks and 45 aces, which helped Niles go undefeated and win the Wolverine Conference championship in its first season in the league. She was also a member of the BCS Athletic Conference Red Division championship team in 2020.

During her career, Beckman has earned Division 2 All-Region, first-team All-Conference, and Division 2 Team Academic All-State for the past three years. She also earned individual Academic All-State this this past season. Beckman also helped the Vikings win numerous tournament championships, a Division 2 District championship, a regional championship and a trip to the MHSAA state quarterfinals, where Niles was defeated by No. 1-ranked and three-time defending Division 2 state champion Grand Rapids Christian.

Beckman becomes the fourth Viking to sign a letter of intent, joining Knight, Nikola Nate and Amara Palmer. She is also the ninth member of Jenny Nate’s inaugural recruiting class.

They are joined by Shayla Shears, of Edwardsburg; Kate Miles, of Centerville; Bianca Hobson, of Kalamazoo Loy Norrix; Elizabeth Stockdale, of Brandywine; and Faith Rankin, of Battle Creek Lakeview.