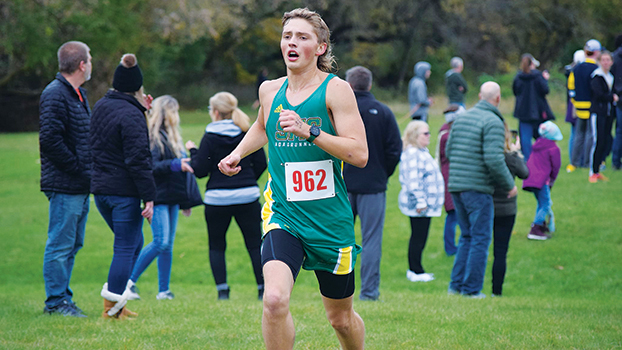 The Roadrunners, who revived their program after a 25-year absence this season, are heading to Richmond, Virginia, to compete in Saturday’s Division II national finals. Southwestern Michigan last finished in the top 10 at the NJCAA Championships in 1995. The Roadrunners have 24 top 10 finishes at nationals, including being National champions in 1974, 1975, 1978 and 1981.

The men’s cross country team consists of seven runners from the immediate area, including sophomore Alec Saylor and freshman Ethan Saylor, of Dowagiac, who have emerged as SMC’s top two runners.

First-year SMC Coach Zac Sartori has been pleasantly surprised at how well the season has gone for both the men’s and women’s teams, as both qualified for the national meet and have been ranked in the top 20 all season long.

“This weekend is going to be crazy,” Sartori said about the trip to Virginia for nationals. “We fly out at 6 a.m. Friday so we can get out there on time. These guys are going to be getting leaving at 3:45 in the morning from here. We want to get out there and get some practice on the course and maybe exploring a little bit of Richmond and hopefully learning a little bit about this country’s history.”

Sartori said his teams are ready for Saturday’s meet. He said they have put in the work, and hopefully, that will pay off with a strong finish.

“They do not need to do anything special,” he said. “They don’t need to have the best performance of their life or anything like that. They just need to go out, run hard and challenge their competitors.”

The Roadrunners will take a No. 19 ranking for both teams into the finals. Sartori believes both squads can finish higher than that.

“I think we can exceed those rankings,” he said. “I don’t expect a top-five ranking this year, but I think they can go out there and really challenge the competition.”

Alec Saylor originally was not going to be a runner on the cross country team, but instead planned to help. His younger brother, Ethan Saylor, helped talk him into it. The pair made an immediate impact on the program.

“He decided that he wanted to give this a shot,” Sartori said of Alec. “We are thankful to have him here. He is a good leader.”

“The first year is definitely the most important year because we get to bring back all the memories and start to build the program back,” Alec said. “It has been a good first year. From here on out, it will start to pull together, and hopefully, in the future, it can return to what it used to be.”

Alec said he changed his mind about running instead of coaching because he likes to help people achieve their goals.

“For me, I like to help people achieve what they don’t think they can achieve,” he said. “For me, being able to be on the team and help push other people, I think it was a better move than helping coach. I thought I could do more that way. There is a quote I like to live by, ‘100 percent of me is nothing compared to one percent of my team.’ It just means that if you have a team, you can do so much more than you can individually.”

Ethan Saylor said he made the first move when it came to joining the Roadrunners.

“I originally signed up first,” Ethan said. “It was a great opportunity to help them start this historical moment at SMC. I kind of talked his ear off about a little bit about how exciting it was going to be to run cross country in college.”

The two brothers never thought they would be on the same team as they are separated by four years in age.

“I never envisioned us even being at the same school,” Ethan said. “It is pretty cool that we have gotten to share this.”

“I always wanted to be on the same team as him in soccer,” Alec said. “I always looked up ET [Ethan] because he is better than me even though he is younger. Even in running, he has been better than me. So, I have had to work a lot harder than he has to be faster than him. So, I know if I can run fast, I can push ET to something he didn’t think he could do.”

The women’s team will be led by freshman Ava Hart, of Oak Park River Forest High School in Illinois.

The finals, which can be seen for free on the NJCAA Network, will begin with the Division II men’s race at 11:15 a.m. The women’s race is scheduled to begin at 12:45 p.m.