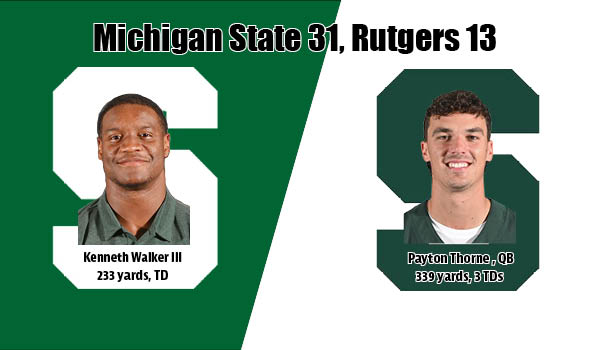 PISCATAWAY, N.J. — The Michigan State football team improved to 6-0 on the season with a 31-13 victory over Rutgers at SHI Stadium Saturday afternoon.

Redshirt junior wide receiver Jalen Nailor tied a school record with three touchdown receptions and had five catches overall for 221 yards, the fourth-highest receiving total in school history. He caught TD passes of 63, 63 and 65 yards, all in the first half.

Junior running back Kenneth Walker III had another 200-yard rushing performance, this time collecting 233 rushing yards on 29 carries, including a school-record 94-yard rushing touchdown in the third quarter (previous: 90 yards by Lynn Chandnois in 1949 vs. Arizona). The 94-yard rushing TD by Walker was also the longest offensive play from scrimmage in school history (previous: 93-yard pass play from Tony Banks to Nigea Carter vs. Indiana in 1994). It marked Walker’s fourth 100-yard rushing effort this season, and the second time he has gone over 200 yards (career-high 264 vs. Northwestern on Sept. 3).

Red-shirt sophomore Payton Thorne was 16-of-27 passing for a career-high 339 yards and three touchdowns, all to Nailor.

It marked the first time in school history that the Spartans produced a 300-yard passer (Thorne with 339 yards), 200-yard rusher (Walker with 233 yards) and 200-yard receiver (Nailor with 221 yards) in the same game.

On special teams, Matt Coghlin became the school’s all-time leader in field goals with his 72nd career field goal in the fourth quarter from 35 yards out.

Defensively, the Spartans shut out the Scarlet Knights (3-3, 0-3 Big Ten) in the second half. Sophomore Darius Snow led the team with a career-high nine tackles.