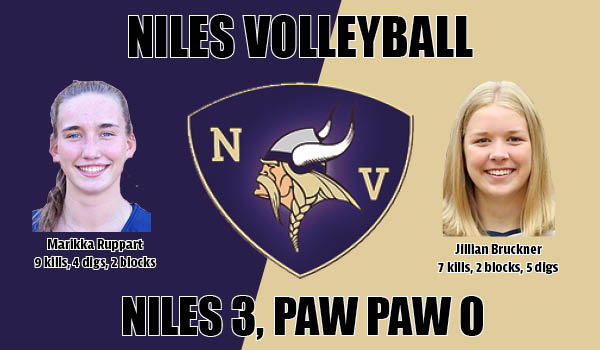 PAW PAW — The Niles volleyball team is closing in on clinching at least a share of the Wolverine Conference championship with a sweep of Paw Paw Thursday night.

The Vikings’ 25-9, 25-12 and 25-8 victory over the Red Wolves, coupled with Edwardsburg’s 3-2 win over Otsego, left Niles as the only undefeated team in the conference. The Vikings and Bulldogs play Thursday night.

A Niles win gives the Vikings a share of the championship, while a loss would force a three-way tie atop the standings — with Otsego and Edwardsburg — with one match remaining.

Niles Coach Jenny Nate was happy with the way her team kept its focus throughout the match.

“Our goal this week was to maintain our energy at all times, get a fast lead in every set, control the runs, and keep the pressure and aggression on every single point to 25,” she said. “We have to put the pedal down and stay on it to close every set. We did a great job accomplishing that goal tonight. Our entire team played tonight [besides one injured and one out today], and we maintained our lead and score margins every set no matter what combination we had on the court. I love watching these girls keep getting stronger each week.”

With just one match left in the conference campaign, Nate and the Vikings will be working hard to prepare for Otsego.

“They are all in together and know what they need to practice like in order to keep improving,” she said. “They also know the importance of consistency and playing clean ball, especially during long rallies; they work hard to be smart with the ball — to place the ball strategically, and then when the set is really there — to put the ball away. We are looking forward to a weekend off to get some rest, study film, and prepare to take on Otsego next week.”

Complete statistics from the Paw Paw match can be found online in Daily Data at leaderpub.com.

Play is scheduled to begin at approximately 6 p.m. Thursday. 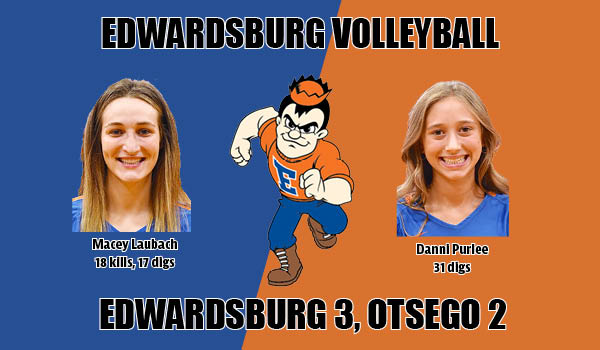 The win kept Edwardsburg right behind undefeated Niles in the league standings at 6-1. The Vikings are 7-0. Otsego entered the Edwardsburg match 6-0, but are now tied for second with the Eddies.

Niles will take on Otsego Thursday night with a chance to clinch at least a share of the conference championship.

Macey Laubach had a big night at the net for Edwardsburg with 18 kills. She also had 17 digs. Liz Pederson added 13 kills, while Danni Purlee had a team-high 31 digs for the Eddies.

Lexi Schimpa finished with 12 digs, two aces and 37 assists. Hannah Closson also had two aces to go along with 17 assists.