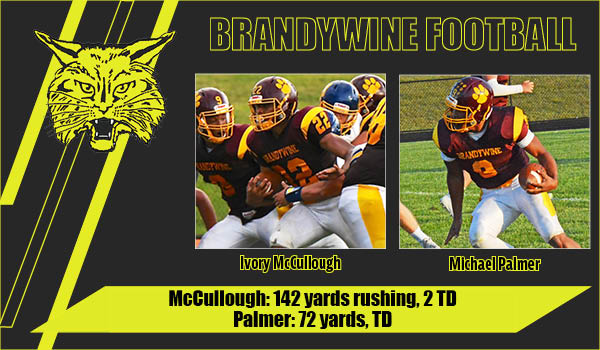 SOUTH HAVEN — After scoring in each of the first three quarters, visiting Brandywine was shut out in the final 12 minutes, leading South Haven rallying for a 24-22 BCS Athletic Conference victory Friday night.

The Bobcats and Rams traded touchdowns all night long. Unfortunately for Brandywine, South Haven was the only team to score in the fourth quarter as Justin Frazier went 33 yards for a score and Trent Till converted on the extra point run for the final margin of victory.

Till would score a pair of touchdowns for the Rams, and ran in all three 2-point conversions.

Brandywine got a pair of touchdowns from Ivory McCullough — eight and two yards — as he finished the night with 142 on 29 carries. Michael Palmer scored the other touchdown for the Bobcats, who lost their fourth consecutive game. Palmer added 72 yards on 16 carries.

Brandywine (2-4, 0-2 BCS) converted on its first two point-after-touchdown plays as Blake Krueger hooked up with Chase Valade through the air. But the Bobcats duo could not convert on the final PAT attempt.

The Bobcats are back on the road Friday night as they make the short trip to Buchanan to take on the rival Bucks. Kickoff at Memorial Field is scheduled for 7 p.m.