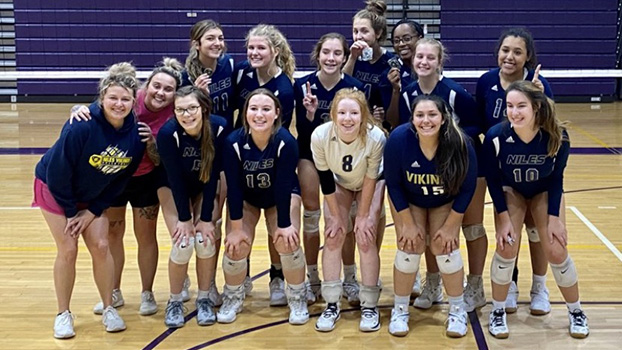 Waiting for Niles was Portage Northern. However, this time, the Vikings turned the tables on the Huskies and defeated them 25-23 and 25-16.

“It was a very up and down day for us,” said Niles Coach Sammee Schaller. “The girls started the day out on a good note beating Union City in pool play and beat them in all three sets we played against them. We then took on Portage Northern in pool play and lost all three sets to them. That brought us 3-3 in sets coming out of pool play. We struggled with our errors and playing smart volleyball.”

Schaller said her team picked it up and got the job done with a clean slate heading into the championship round.

“These girls worked hard and stay focused,” she said. “They had a vengeance to come back and get Portage Northern after losing to them earlier in the day and they did just that. Our theme in practice has been focused, fun and that is exactly what we did today.”

Zoe Gondeck had 21 kills and 17 blocks for the Vikings, who also got 23 kills and three blocks from Tia Cornelius and 21 kills and a block from Anna Kennedy led Niles with 44 points and 48 assists, while Stella McDaniel Liz Van De Putte finished with 27 points and 30 digs.