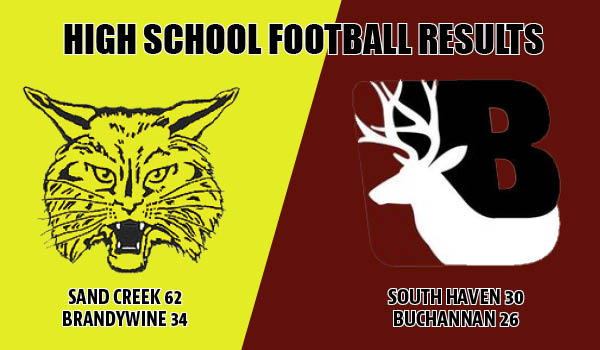 SAND CREEK — After a quarter of Friday night’s Brandywine at Sand Creek football game, the visiting Bobcats were hanging with the Aggies.

Brandywine trailed by only a touchdown, 24-16, but that was a close as the Bobcats would get as Sand Creek outscored Brandywine 38-18 over the final three quarters to earn a 62-34 non-conference victory.

The loss dropped Brandywine’s record to 2-2, while the Aggies improved to 3-1.

The Bobcats were unable to stop the Aggies’ John Alexander, who rushed for 262 yards on 21 carries and scored six touchdowns.

Sand Creek finished the game with 363 yards on the ground. Quarterback George Hilliard was 2-for-3 for 22 yards passing.

Brandywine had a solid night running the football as the Bobcats finished with 277 yards on the ground, led by Michael Palmer’s 174 yards on 27 carries and a pair of scores. Quarterback Blake Krueger was 6-of-18 for 100 yards and a touchdown.

Conner Dye caught three of those passes for 73 yards and a touchdown.

Defensively, Carter Sobecki had six tackles, including three for losses that totaled 12 yards. He was credited with a pass break-up. Jordan Grice had five tackles and Palmer four. Joe Frazier and Jacob Sherrick both recovered fumbles.

Brandywine remains on the road Friday night as it heads to Lawton for a non-conference game. Kickoff is set for 7 p.m.

Host South Haven took a 30-19 lead into the second half against visiting Buchanan Friday night, and then had to hold off the Bucks to win 30-26 in BCS Athletic Conference action.

South Haven had 412 yards of total offense compared to 193 for Buchanan, which dropped to 1-3 on the season and 0-2 in the BCS.

The Bucks continued to struggle running the football as they finished with just five yards on the ground.

Quarterback Connor LeGault was 17-of-28 for 189 yards and a pair of touchdowns. He was also intercepted four times by the Rams. Drew Glavin had seven receptions for 53 yards and Dillon Oatsvall five receptions for 52 yards.