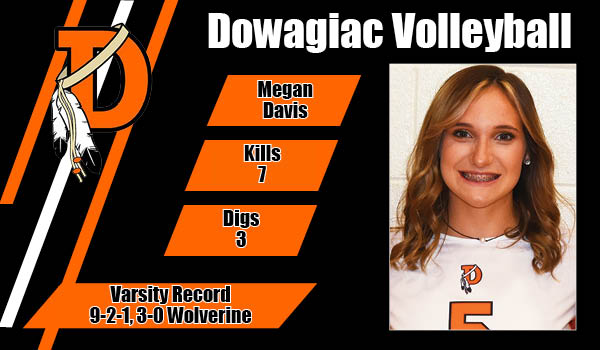 PAW PAW — The season may still be young, but the Dowagiac volleyball team is making a statement in the Wolverine Conference.

After posting first-ever wins against Vicksburg and Plainwell to begin conference play, the Chieftains remained undefeated in league matches with a sweep of host Paw Paw Thursday night.

Despite a slow start, the Chieftains were able to regroup and take control of the match after the opening set.

“Paw Paw started out with a tough server that ate us up,” said Dowagiac Coach Tony Hooley. “A few minutes into the match, and we were down five or six points. We clawed our way back to tie it up three times, only to fall back several points again. We finally took the lead around the 19th or 20th point and were able to control the rest of the match.”

Dowagiac had a balanced attack at the net and played well defensively.

“We continue to block well, play nice, scrappy defense, and our serving has been a strength all season so far,” Hooley said. “Megan Davis, Riley Stack and Caleigh Wimberley have been our all-around ‘go-to’ players and they turned in another great performance. We have several other up-and-coming players that will shine from time to time also. I saw every player on the floor make a great block or amazing dig in this match.”

Wimberley and Khloie Goins both had seven digs for the Chieftains. Wimberley finished the night with three kills and Davis two.

Dowagiac will be back on the court Monday as it travels to South Haven to face their former Wolverine Conference foe.

Complete results may be found online at leaderpub.com in Daily Data: Friday, Sept. 10.