Dowagiac falls to Saugatuck in semifinals 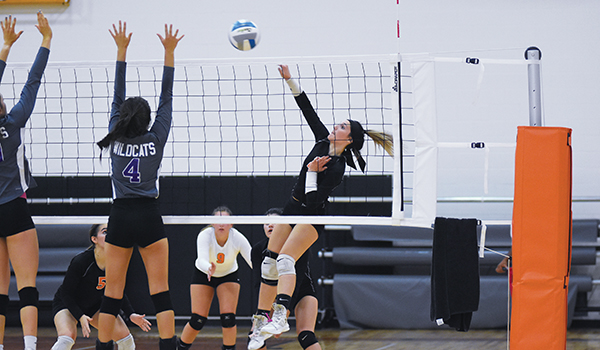 Megan Davis had 23 kills and 20 digs for Dowagiac at the Delton-Kellogg Tournament Wednesday. (Leader file photo)

DELTON — The Dowagiac volleyball team has lost two matches so far in the early stages of their 2021 season. Both of them are at the hands of Saugatuck.

Despite falling in the title match again to Saugatuck, Dowagiac Coach Tony Hooley was pleased with what he saw Wednesday.

“In the first three matches, we played some of the most efficient, complete volleyball I have seen at Dowagiac,” he said. “We passed out of serve-receive well and made very few errors in general. We scored through our serve, we scored from the left, right, and middle attack, and we scored points with power hitting and with timely, well-placed, tips.”

Hooley said that his team got off to a good start in the championship match, but could not maintain its momentum.

“We started the fourth match still playing with great command, taking an early lead. Then the wheels came off,” he said. Once we started making mistakes we couldn’t find our rhythm again and it got a little rough. We still have some work to do on our mental game. These players are talented and capable of doing great things, they need to start believing it even when they go through adversity.”

Dowagiac is back in action Monday as it opens up the Wolverine Conference portion of its schedule with a trip to Vicksburg.

Complete statistics can be found at leaderpub.com in Daily Data.