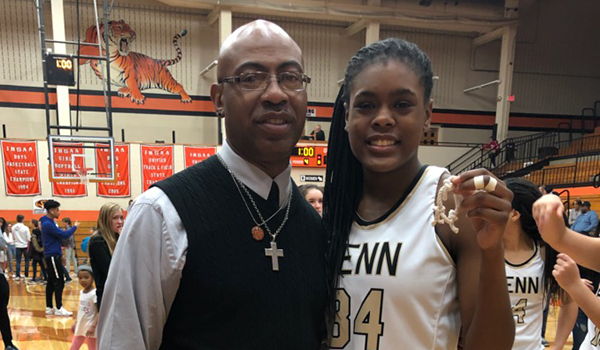 MISHAWAKA, Ind. — A Niles graduate has made a name for himself in Indiana high school basketball.

Earlier this year, 1983 Niles High School graduate Hassan Abdullah was named the Indiana Basketball Coaches Associations’ Assistant Coach of the Year. For the past 12 years, he has worked with Mishawaka’s Penn High School girls basketball program. He was nominated for the award by varsity coach Kristi Ulrich.

“Coach Hassan has greatly touched and enriched the lives of our players year after year,” Ulrich said. “He is passionate and loves to coach. He greatly enjoys teaching and helping young people see the best in themselves as they grow and develop from year to year.”

Over the past 12 years, Penn has had a state-best aggregate record of 277-36 in girls basketball — a .885 win percentage. During that span, the Kingsmen have won 10 sectionals, six regionals, three semi states and the Class 4A state championship in 2016. Abdullah, who previously assisted for six seasons at other high schools, had a key role in Penn player development at the high school level, as well as serving as assistant director of the Lady Kingsmen feeder program that runs each fall.

“Coach Hassan has impacted my life tremendously,” said former player Delayne Sanchez. “He has been a role model and parent figure in my life since I was a little kid. I don’t know where I would be without him.”

“Coach Hassan impacted my life by helping me understand what I wanted to do going further with my basketball career,” said 2017 graduate Lindsy Kline.

“Coach Hassan has always been a great motivator,” added Sara Doi, who currently plays for the Indiana University South Bend Titans. “He gave me confidence and believed in me during times that I didn’t believe in myself. I’m truly grateful for that.”

Coach Ulrich said she believed Abdullah deserved the recognition as IBCA’s Assistant Coach of the Year.

“There is no one more loyal to their head coach, their program and their school than Coach Hassan,” Ulrich said. “He is open minded and always willing to grow, and he is a true ‘student of the game.’”