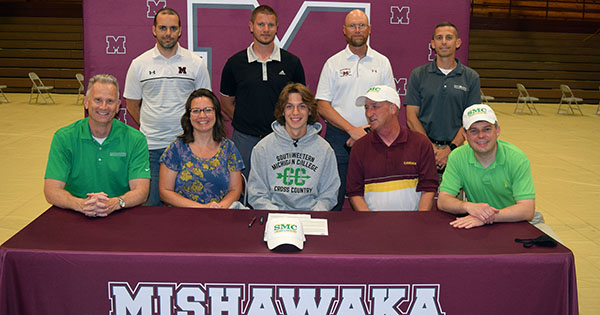 Hall was already investigating SMC’s automotive technology program when he learned of cross country’s comeback after a 25-year absence. The college is also reinstituting four other intercollegiate teams, men’s wrestling, women’s volleyball and men’s and women’s basketball in fall 2022, and is planning a facilities upgrade of the Charles O. Zollar Building on SMC’s Dowagiac campus.

Hall played football and basketball from elementary school until his freshman year.

“Then I joined cross country and put all emphasis toward running after that,” he said. “Running has opened up my world.”

His 5K personal best is 18:00. He also has played soccer and run 400 and 800 meters in track. “My sister got me doing middle distances,” he said, while his coaches and teachers “made me a better athlete, a better student and maybe even a better person.”

“When they said, ‘We’d love to have you on the cross country team,’ since I’d already applied there, that sounded perfect,” said Hall, who is also considering studying business.

“It’s always been a dream to play football or basketball at the next level,” he added, “but it honestly never occurred to me until this recent track season that I could go on to that next level. I like the trails. It will be nice to practice on our own campus. Southwestern consistently reached out to me. To be part of a brand-new, fresh program is really special. They showed me a lot of their rich history, and the fact that they are bringing it back makes me want to be a part of it.”
Mishawaka Athletic Director Dean Huppert, a former sportscaster, interviewed President Odenwald, who said, “We’re excited about having a Caveman and a Cavewoman. I hope this will be a pipeline for us as we add basketball, volleyball, wrestling, pep band and dance team. I don’t know if we’ve ever had such a strong response on social media because we’re not just adding sports, we’re doing our facilities, too — about a $2 million renovation of our gym, locker rooms, new playing surface, bleachers.”

Getting to this point in less than a year gives him goosebumps, Odenwald said.

“In July, our board chair [Tom Jerdon] suggested we look into this. It was a dream. We watched the movie ‘McFarland USA,’ then started doing the work. Here we are 10 months later, the dream is reality,” he said. “The dream is no longer ballcaps and shirts, it’s kids signing. And in the fall they’re gonna be running. That’s what’s amazing.”

Hall impressed Odenwald as a “hard-working kid. His granddad is here and I think of my own grandfather and how important he was in my life. His grandfather was telling me he’s been working with him and teaching him how to work and my grandfather did the same for me. I think that is a lot of what SMC is. It’s full of hard-working kids, whether they are athletes or non-athletes. He’s gonna make a heck of a mark there.”

CASSOPOLIS — One area organization is resuming tours of a historic home. The Cass County Historical Commission will resume its... read more