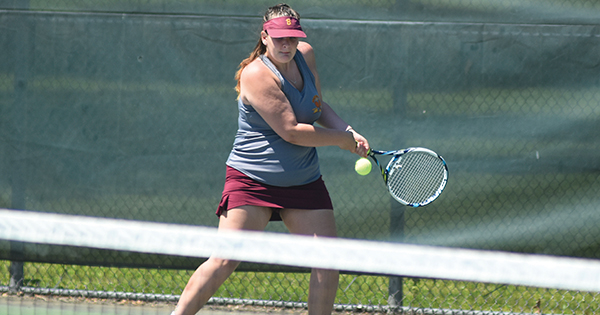 SOUTH BEND, Ind. — No other school has ever won a BCS Athletic Conference girls tennis championship in the league’s history other than Brandywine.

The Bobcats captured their eighth consecutive league championship at Leeper Park Thursday as they edged rival Niles. Brandywine, which had players in all eight championship flights, finished with 59 points, while the Vikings finished with 54 points.

It was the second straight season that Brandywine was represented in all eight championship flights. There was no tournament in 2019 after the Michigan High School Athletic Association canceled spring sports due to the COVID-19 pandemic.

Additionally, the Bobcats have never lost a BCS dual match.

“Anytime you can put all eight flights in the finals, you know the results will be good,” said veteran Brandywine Coach Joe Marazita. “With 11 new players in our starting lineup, our team had to really work hard for this title, and they earned it.”

The Bobcats won the No. 2 singles title, with Hannah Earles defeating Katie Schau, of Buchanan, 6-3 and 6-1 in the finals.

In doubles, Brandywine split the flights with the Vikings, winning at No. 2 and No. 4, while Niles won at No. 1 and No. 4.

Niles’ Sydney Schiele and Cadence Knight avenged a regular-season loss to Brandywine’s Katie Stratton and Emma Hinsey to win the No. 1 doubles championship. The defeated their rivals 6-3 and 6-2 in the finals.

At No. 3 doubles, the Vikings’ Stella McDaniel and Meg Klingerman also avenged its regular-season loss to Tressa Hullinger and Ellie Knapp with a 6-2, 3-6 and 6-3 victory.

Marazita credited the work by veterans Stratton and Williamson for the team’s success this season.

“The leadership provided by Katie Stratton and Jessica Williamson has really contributed to our team’s identity and positive practice habits,” he said. “Coach [Rich] Robbins and myself are very proud of their group of over-achievers.”

The teams will now turn their focus to the MHSAA regional tournaments, which begin on Thursday.

Niles will travel to Three Rivers for its Division 3 regional, which will also include Edwardsburg.

NILES — It was not a pretty win, but the Niles boys golf team will take it. The Vikings took... read more