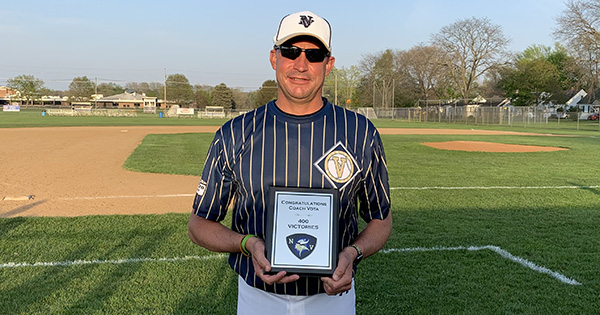 The Vikings swept the visiting Bobcats by identical 13-3 scores to give Vota the milestone.

Vota was quick to point out the players and assistant coaches over his 23-year career that helped make Tuesday possible.

“There have been a lot of great players through the years,” he said after the Vikings completed the sweep, and he was showered with water by his players. “I think about all the assistant coaches that I have had that helped make this possible.”

Brandywine got off to quick starts in both contests, but were unable to maintain the momentum.

Brandywine (5-5) led 2-0 in both games before the Vikings got the bats rolling. Niles has scored 13 runs in four consecutive contests. The Vikings have scored 13 or more runs in six straight games.

After falling behind in the opener, Niles (10-1) scored three runs in the bottom half of the first and second innings to take a 6-2 lead over the Bobcats. The Vikings put the game out of reach with a five-run fifth inning.

Niles finished the game with 11 hits, including a double and a home run by Jude Abbadessa. Abbadessa’ two-run home run in the sixth inning ended the contest.

Also picking up doubles for the Vikings were Mason Waggoner, Cade Vota and Jadon Hainey.

Gabe Gouin and Jamier Palmer both doubled for the Bobcats.

Drew Racht picked up the win for Niles. Cam Barrier took the loss for the Bobcats.

In the nightcap, Brandywine again led 2-0 before the Vikings scored a run in the bottom of the first and then took the lead with three runs in the third inning. Niles broke the game open with four runs in the fourth and five in the fifth inning.

The Vikings finished with 11 hits, including doubles by Waggoner and Abbadessa. Palmer had a triple for the Bobcats.

Abbadessa picked up the win in relief of starter Gage Vota. James Barnes suffered the loss for the Bobcats.

“They were better than us today,” said veteran Brandywine Coach David Sidenbender. “I thought we hit well at times, and we are having better and better at bats as we see more and more live pitching. I felt we kept battling the whole day. Congratulations to coach Vota.”