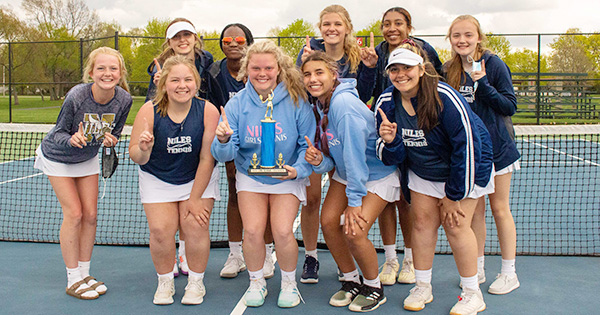 The Vikings won the Coldwater Invitational, while the Bobcats captured their own tournament.

Niles defeated Three Rivers, Coldwater and Bronson to finish with 27 points to edge the Wildcats, who finished with 23 points. Coldwater was third with 27, and Bronson was fourth with 12 points.

Winning matches for the Vikings against Three Rivers were Laura Golubski at No. 1 singles and the Niles doubles teams of Sydney Schiele and Cadence Knight, Anna Johnson and Nevaeh Williams, as well as, Stella McDaniel and Nicole Aufie.

Picking up wins against Coldwater were Golubski, Schiele and Knight, Johnson and Williams, McDaniel and Aufie, along with Zoe Gondeck and Anna Kennedy.

Against Bronson, winning matches were Golubski, Eva Shepherd and Meg Crites at No. 2 and No. 3 singles, and Schiele and Knight in doubles.

DOWAGIAC — Dowagiac Union Schools will soon be upgrading its communication capabilities. The DUS Board of Education unanimously approved the... read more