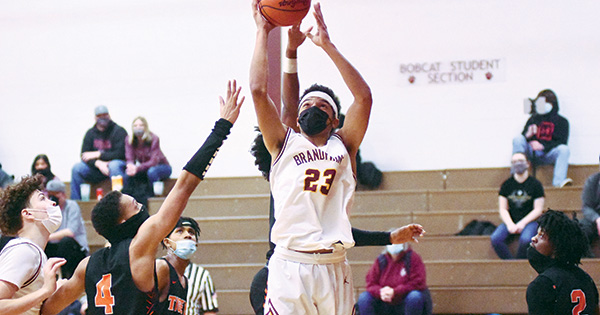 Bobcats headed back to district finals

The Bobcats withstood a 3-point barrage from the Wildcats and went on to win 60-51 in Division 3 district semifinal action at Bridgman High School.

“That’s what March is all about,” said Brandywine coach Nate Knapp. “I told the kids to enjoy the moment. We found a way to keep battling with them. We made a few adjustments at halftime about things we have to do, like leaving the shooters open, but it was a great team effort tonight.”

Marcellus took a 3-0 lead following a Gavin Etter 3-pointer, but the Bobcats responded with a 9-0 run to take the lead for good. Brandywine led by as many as nine in the first half, but Marcellus used seven first-half 3-pointers to keep it close and make it a 33-30 game at halftime.

The third quarter was contested, but the Bobcats were able to slow Marcellus’ perimeter attack. The Brandywine defense length began giving Marcellus problems, with several passes being tipped or stolen outright. A Caleb Byrd fast-break dunk gave Brandywine a 45-37 lead, but Byrd was whistled for a technical foul for celebrating. The energy brought by Byrd and Gabe Gouin was the lift the Bobcats needed.

“Caleb and Gabe both bring the energy defensively,” Knapp said. “It just rubs off on the other kids. We got after it, and we got quite a few steals. It’s fun to watch the kids, and the kids bring everything they can. These kids are great kids and they’re fun to be around.”

Up 49-41 entering the fourth quarter, Brandywine was able to slow the game down and get to the basket, all the while preventing Etter from getting easy 3-point looks on the other end.

A Drake Surach 3-pointer trimmed the Marcellus’ deficit to 54-48 midway through the quarter, but that was as close as the Wildcats would get. After corralling a rebound, Chrismon ran the fast break and found a cutting Byrd for a layup to put the Bobcats up 57-48.

The Bobcats led by as many as 11 points.

Brandywine was able to slow Etter down after a hot-shooting first half. The senior sharpshooter knocked down six of his eight 3-pointers on his way to 20 first-half points but was limited to just two 3-pointers and 10 points, in the second half. Brady Ferguson scored 10 points and Drake Surach added nine.

Conversely, Bobcats were able to attack the basket with relative ease, with players skying for offensive rebounds, leading to second-chance points.

Chrismon led the team with 25 points, while Byrd and Gouin scored 10 and nine points respectively. Byrd battled first-half foul trouble but played a key role in slowing down Marcellus’ attack.

With a win in tow, the Bobcats (10-2) move on to face Schoolcraft (15-1) at 3 p.m. Saturday in district final play at Bridgman. Knapp and his players know they will need to bring their A-game against the Eagles.

“It’s going to take more than what we showed tonight to beat them,” Chrismon said. “Better on offense, better on defense. Schoolcraft is much better than the team we just played, so we have to play better and work hard.”

“They’re just fundamentally sound,” Knapp said. “Randy (Small) has got a great program over there. They have some height and length, and they extend that zone, it’s kind of like playing Syracuse. It’s going to be fun.”

HARTFORD — Despite missing four of its top six players due to injury or COVID-19 issues, the Brandywine girls basketball team rolled into the Division 3 District championship game with a 51-39 win over Bridgman Wednesday night.

Freshman Ellie Knapp, who was the area’s top scorer this season, got the Bobcats (10-2) off to a good start with nine of her game-high 21 points in the opening quarter. Brandywine led 11-4 after one quarter and never looked back as it opened up a 25-12 halftime advantage.

Knapp added six assists on the night for the Bobcats, who got eight points and 14 rebounds from Haley Scott and five points and nine rebounds from Kallie Solloway. Courtney Bates finished with nine points.

The Bucks (12-0) jumped out to a 19-5 first-quarter lead on Lakeshore at Benton Harbor High School and cruised home with a 56-34 victory.

Buchanan held Lakeshore to nine first quarter points. The Bucks led 34-9 at the break and 44-22 heading into the final quarter.

Faith Carson scored a game-high 19 points, to go along with nine rebounds and eight blocks, to lead Buchanan, which also got 13 points, three rebounds and two steals from LaBria Austin.

The Bucks will more than likely have to play the remainder of the season without starter Claire Lietz, who suffered a knee injury in practice Tuesday.

Cassopolis woman gets jail for using drugs on probation

CASSOPOLIS — A Cassopolis woman who has continued to use drugs and alcohol while on probation will be spending more... read more