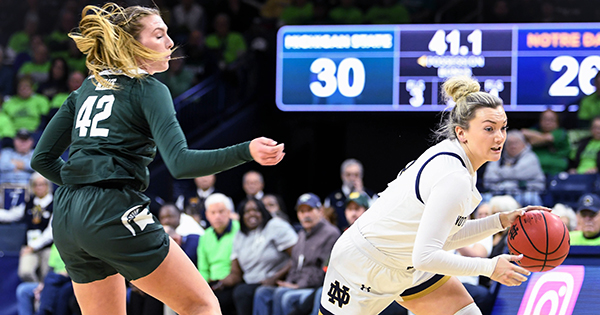 Notre Dame will open its women’s basketball season on the road Friday at Miami of Ohio. (Leader file photo)

NOTRE DAME, Ind. — The No. 22 nationally-ranked Notre Dame women’s basketball squad finalized its non-conference slate for the upcoming 2020-21 season. Game one of the Ivey Era officially kicks off at noon on Friday at Ohio University.

The Irish will then get settled in at home with five consecutive games inside Purcell Pavilion. First up, Miami (Ohio) at 4 p.m. Sunday on the ACC Network.

Notre Dame’s first top-25 ranked battle of the season comes early, in the form of No. 25 Michigan on Dec. 3. That game is slated for 6 p.m. on ACCN. Then, the Irish wrap up the non-conference slate with IUPUI on Dec. 6. Tip against the Jaguars is set for 2 p.m. on ACCNX.

Notre Dame and Michigan have clashed quite a few times over the years, meeting as recently as last year, where the Irish earned a 76-72 road victory in Ann Arbor. Overall, Notre Dame leads the series, 13-7, having won seven of the last eight.

The University of Notre Dame, in accordance with campus health and safety protocols and with the guidance of local health officials, will limit attendance at the beginning of the winter seasons to only guests of student-athletes and coaches of competing teams at this year’s men’s and women’s basketball and hockey games.

Those in attendance will be required to adhere to campus policies to protect the local community (i.e. wearing a mask, practicing physical distancing, etc.). As the seasons progress, the University, the Atlantic Coast Conference and the Big Ten Conference will continue to monitor the conditions and evaluate the possibility of welcoming additional audiences. If Notre Dame decides to extend invitations beyond the campus community, season ticket members will receive priority to purchase single game tickets.

For additional questions regarding becoming a season ticket member, please contact the Murnane Family Ticket Office at (574) 631-7356 or email at tickets@nd.edu.