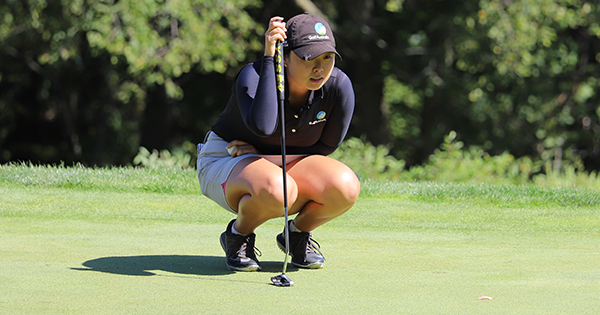 Robyn Choi remains in the hunt at the Four Winds Invitational as the final round is under way at Blackthorn Golf Club on Sunday. (Photo courtesy Symetra Tour)

Kaufman backed up here opening-round 67 with a 69 on Saturday to move to 8-under par heading into the final 18 holes of play.

“Here, I feel more like I did in Battle Creek. I am trying to play the golf course and not other people,” Kaufman said. “I did look at the leaderboard I when I turned at 18, so the back is a little harder if you kind of know where you’re at in the mix, but that’s it. When you can just play the course and not the other people, it’s a lot less pressure and a lot less nerves.”

Lauren Coughlin is a shot back after shooting a 68 on Saturday. At 7-under par, she is two strokes better than Samantha Wagner, Robyn Choi and Hira Naveed.

“I have a great caddy. He keeps it super light out there for me, which helps,” Coughlin said. “We talk about sports and TV shows and pretty much anything but golf until we have to. We had a lot of really good numbers we’re on the same page all the time, so whether it’s off the tee and with my irons on the green like we’re always on the same page. I always feel very confident in everything I do because I know we are in sync.”

Task force made it possible to have racing at RedBud

BUCHANAN — A lot of work has gone into preparing RedBud MX for racing this Labor Day weekend. That work... read more