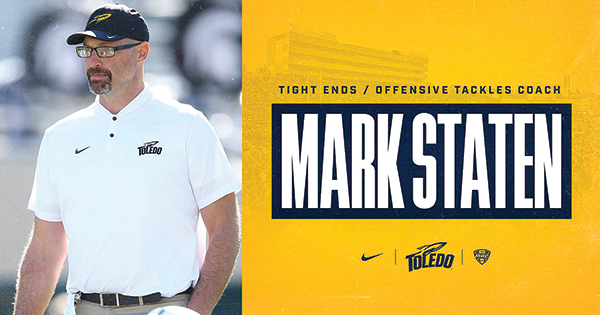 Staten will coach the Rockets’ tight ends and offensive tackles.

Staten comes to Toledo after spending the last 13 seasons at Michigan State University as an assistant coach. His duties with the Spartans included serving as their tight ends coach from 2007-10 and offensive line coach from 2011-18.

Staten also coached the tight ends for MSU in 2019.

Prior to his tenure at Michigan State, Staten was an assistant at Cincinnati (2004-06) and a graduate assistant coach at Ohio State (2002-03).

“We are excited to welcome Mark into our program,” Candle said. “He brings a championship pedigree to our team, and he has proven himself to be a great leader and teacher of young men.”

Staten coached three All-Americans, five NFL Draft picks, and 12 All-Big Ten players at Michigan State. His work with the offensive line helped lead the Spartans to two Big Ten Championships in 2013 and 2015, and a three-year record of 36-5 from 2013-15, the winningest stretch in school history.

Overall, he logged 114 career wins as an assistant coach under head coach Mark Dantonio, and was a part of the winningest Michigan State coaching staff in program history.

“I am excited to join the University of Toledo,” Staten said. “I have always been proud to be an alumnus of the Mid-American Conference. When you talk about championship-level MAC football, Toledo is always in the equation. My family and I are looking forward to being a part of the Rocket family and the Toledo community. I feel very fortunate to join Coach Candle and the offensive staff. There is a lot of talent on this football team. I am beyond fired up to get after it and grind it out as we begin our 2020 march to Detroit.”

Staten has a reputation for mentoring linemen and tight ends. The Spartans’ 2015 offensive line was a finalist for the Joe Moore Award for the Most Outstanding Offensive Line Unit in College Football and featured two All-Americans in center Jack Allen and left tackle Jack Conklin. The offensive line helped pave the way for Michigan State’s College Football Playoff berth, the first in school history. Conklin went on to be the No. 8 overall selection in the 2016 NFL Draft by the Tennessee Titans.

At Cincinnati, Staten coached All-BIG EAST tight end Brent Celek, who would go on to play 11 seasons in the NFL and win a Super Bowl with the Philadelphia Eagles. Under Staten’s tutelage, Celek broke several program records for tight ends during his career as a Bearcat, including the career records for receptions, receiving yards, and touchdowns by a tight end.

Prior to joining the Cincinnati coaching staff, Staten was an offensive graduate assistant coach at Ohio State (2002-03), helping the Buckeyes to a national championship in 2002. He worked with the offensive linemen, tight ends, and long snappers at OSU.

Staten played college football at Miami (Ohio), where he was an All-MAC defensive tackle. Professionally, he was a member of the Cincinnati Bengals and New England Patriots organizations from 1993-94, and he was drafted by the World Football League’s Barcelona Dragons in 1995 before his football career came to an end due to injury.