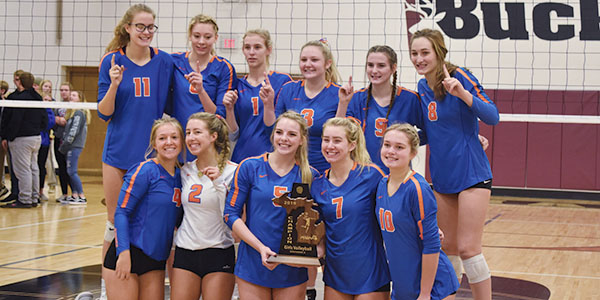 EDWARDSBURG — Saturday was for Edwardsburg volleyball, as it defeated Buchanan in three-set for the Division 2 district championship for the third year in a row.

Going into the match, first-year coach Nikki Bush said her team’s performance at past Saturday matches has sometimes been up and down.

“Saturday is not our greatest day to compete,” Bush said. “I was a little nervous, but I knew as long as they did what they were supposed to do we would come out on top.”

“I am incredibly proud,” Bush said following the trophy ceremony. “This is the third district championship in a row, I mean that’s amazing. It takes a lot of hard work to get here.”

Bush, who became Edwardsburg coach just two months before volleyball season, knew the capability of her team well before they stepped on the court for their first match because of Krush Volleyball Club.

“I’ve got a team with a ton of work ethic,” she said. “I know what their potential was and it was just up to them to perform.”

Kills from seniors, Jocelyn Hack and Skyelar Burlingham propelled the team offensively as the Bucks made several side-out errors early on and was called for more than three hits. Juniors Sophia Overmyer and Paige Miller also added in kills throughout all three sets.

The Eddies’ setter, Emma Strefling, who left the Bucks’ volleyball program after her freshman year, and had to sit out her sophomore season because of the transfer, also played a vital role in for the Eddies, digging up spikes from the Buchanan’s outside hitter Josie West and middle hitter Faith Carson.

A young Bucks team, who added five new starts to their varsity lineup, finished out the season giving the Eddies a tough first and second sets. Buchanan led the first sets for a few points, but could not maintain the momentum as the Eddies roared back to take the lead.

With no on the roster, Buchanan coach Shelly Bender walked off the court proud of the effort her young team put into this season.

“We ended on a very strong note,” Bender said. “Our goal all season was to be consistent and I felt like we played very well today and were very consistent. They rose to the occasion, did what we planned, it didn’t go our way.”

For Buchanan, junior Claire Shelton, had her first year as a setter. In the offseason, Bender plans to work on Shelton’s development and get in more reps. Confidence will also be a focus for the Bucks during their offseason.

Looking forward to the regional championship match next, Bush said the team will be focusing on stepping up its defense and more specifically working on blocking in order to make it to the next level of play.

Reading shows Rangers why they are the defending champs

READING — There is a reason why Reading in the defending Division 8 state champion. The host Rangers play outstanding... read more