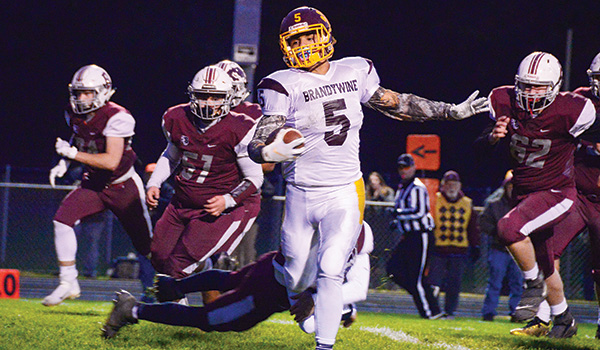 Jordan Abram and the Brandywine Bobcats will be looking to win the school’s first state playoff game as it hosts Constantine at 7 p.m. on Friday. (Leader photo/ERIKA PICKLES)

DOWAGIAC — The field has been set for the 2019 Michigan High School Athletic Association football playoffs.

Four area teams will open up district competition Friday night, including defending state champion Edwardsburg, which won the Division 4 title last season, but has moved up to Division 3 this year.

Also making the postseason were Brandywine, Cassopolis and Dowagiac.

The Chieftains had to play their way into the postseason after opening the year at 3-3.

The Chieftains had to fight their way into the postseason by winning its final three games of the regular season, including a come-from-behind win over Vicksburg in the final minutes on Oct. 18.

Dowagiac and Hopkins have played twice before, once in the regular season back in 1999 and once in the playoffs in 2011. The Chieftains won those games 47-22 and 42-13, respectively.

The winner advances to the district championship game against either Kalamazoo Hackett (5-4) or Berrien Springs (8-0). A Shamrock victory would allow them to host the second-round contest.

Dowagiac is making its seventh playoff appearance since 2011. The Chieftains, who are 5-7 in those games, missed last year’s postseason.

First-year coach Randy Brooks is no stranger to the playoffs as he was a member of the Dowagiac coaching staff that won the 1990 Class BB state championship, as well as being the defensive coordinator at Edwardsburg the previous 10 years. He was also on the Dowagiac staff both times that the Chieftains played the Vikings.

“It should be a good matchup,” he said. “They look like a ‘60’ defense, a single-wing, slash ‘T,’ slash spread offense. Nothing we haven’t seen before. We have seen ‘T’ a couple of times, we saw the single-wing against Paw Paw and last week against South Haven. We have seen the spread against other teams.”

Making the postseason was just one of the Chieftains’ goals when Brooks took over the program last summer.

“We said right from week one, we thought we had enough potential here to win a district championship,” he said. “When I look at the district, I do not think there is anyone better than us. We control our own destiny. They are all good, quality teams, and there are no weak ones in the playoffs, but we are battle-tested because of our conference, and I think we are prepared.”

Kickoff at Hopkins is scheduled for 7 p.m. Friday.

The Eddies, who have won 23 consecutive football games, will host St. Joseph out of the SMAC this weekend. The last time Edwardsburg lost a football game was in the 2017 Division 4 state championship contest.

Edwardsburg and St. Joseph are no strangers to playing each other in the postseason. The Bears and the Eddies competed in the 2015 Division 3 district championship game, which St. Joseph won 40-28.

The winner advances to the district championship game against either Zeeland East (5-4) or Zeeland West (8-1). A West victory would send the Eddies on the road for the second round of the playoffs.

Veteran Edwardsburg coach Kevin Bartz and his staff pretty much knew they would move up a division and are looking forward to the challenge.

“We knew St. Joe was going to be in there, but we did not know which combination of games we would get,” he said. “We were in Division 3 in 2016, and we saw Muskegon [the defending state runner-up] in the semifinals three years ago, so it is time to get going again. We have started looking at St. Joe and getting ready for tomorrow [Monday’s] practice.”

This will be Edwardsburg’s 10th consecutive appearance in the state playoffs. The Eddies have reached at least the regional finals three of the last four years. St. Joseph is making its fifth consecutive trip to the postseason. The Bears have been eliminated in the first round each of the last three seasons.

Kickoff at Leo Hoffman Field is set for 7 p.m. on Friday.

CASSOPOLIS — After reaching the Division 7 state semifinals two of the last three years, the Cassopolis Rangers will compete in Division 8 this postseason.

Cassopolis is making its 14th playoff appearance since 2003. Cassopolis has advanced to the state semifinals in Division 7 two of the last three seasons.

Moving down to Division 8 could be an advantage for the Rangers, but only if they can get past a potential matchup with the defending state champion Reading in the district championship game.

“Over the course of the last two weeks, we had been going back and forth between being projected to be in Division 7 or Division 8,” said Cassopolis coach Dan Purlee. “Not really surprised with what happened. We are happy to be eight. We kind of felt like if we were eight last year, we would have been tough in eight.”

Purlee and his team will have to get past a trap game in White Pigeon, a Southwest 10 Conference foe that Cassopolis beat 41-0 back on Oct. 4. The game was close for a half before the Rangers pulled away to the lopsided victory.

“If we get by that one, we get Reading or Mendon, so it is a tough district for sure,” Purlee said. “There are some tough, physical  teams in it. We will have our work cut out for us for sure.”

Kickoff at William F. Scott Field is set for 7 p.m. on Friday.

Brandywine is making its second straight playoff appearance and its fifth since 2011.

The Bobcats are undefeated for the first time since 1995 and only the second time in school history. Brandywine is one of only two unbeaten teams in Division 6. Brandywine has never played the Falcons in their history.

The winner will face either Jonesville (6-3) or Hillsdale (9-0). A Hillsdale victory would send the Bobcats on the road for the district championship game.

The Bobcats mauled their first seven opponents, allowing a total of 33 points. However, in wins over Parchment and arch Rival Buchanan, Brandywine allowed an average of 36.5 points per game.

Veteran Bobcat coach Mike Nate knows if his team is going to win Brandywine’s first playoff game in school history, it is going to be a challenge.

“They run the Wing T,” he said. “We have not played them, but we have played against the ‘T’ several times. Looking at them on film, they are a solid ball team. The two teams that beat them were Schoolcraft and Berrien Springs. They like to control the ball. They are going to try and keep our offense off the field.”

Nate said that his team’s inability to stop the passing game the past couple of games means that the Falcons may take to the air Friday night.

“It wouldn’t surprise me if they run the spread at us,” he said. “They have it in their offense.”

Nate said that Parchment and Buchanan, the Bobcats’ final two regular-season opponents, played their best games of the season against Brandywine. He liked the fact that his team faced adversity heading into the postseason.

“We are glad we were tested,” he said. “Because that is what we are going to get from Constantine. A big test. In the last few years when we made the playoffs, we ended the regular season with a rout, and we went in thinking this was going to be nothing. Things did not turn out too well for us. Earlier in the year, we were playing better defense, but the competition was not as good.”

Kickoff at Selge Field is set for 7 p.m.

DOWAGIAC — For the fourth consecutive year, the Dowagiac girls golf team has been named Division 3 Academic All-State by the... read more