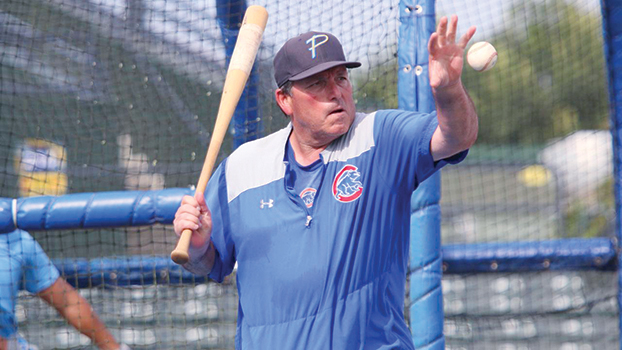 Jimmy Gonzalez, who managed South Bend for the last four years, will now manage the Myrtle Beach Pelicans and veteran manager Buddy Bailey will take over in South Bend.

Buddy Bailey, who has managed in the Cubs organization since 2006, will fly north this upcoming year to manage the South Bend Cubs after spending the previous three seasons with Advanced-A Myrtle Beach.

Bailey’s travels around the country have taken him to numerous destinations since he started his coaching career in 1983 with Pulaski in the Appalachian League. South Bend will be Bailey’s fifth stop in the Cubs organization. By level, he has managed at former Advanced-A Daytona, Triple-A Iowa, Double-A Tennessee, Advanced-A Myrtle Beach and now South Bend.

With Myrtle Beach, Bailey finished with a combined 216 wins. His stint with the Pelicans included winning the 2016 Carolina League Championship.

Overall, Bailey’s record as a manager since 1983 is 2064-1918. The former MLB draft pick of the Atlanta Braves is one of just 11 Minor League Managers to ever pick up 2000 wins or more. Currently, Bailey ranks 10th all-time in that category. In 2018 with Myrtle Beach, Bailey passed Andy Gilbert to crack the top-10 list.

Prior to joining the Cubs organization, Bailey played four seasons in the Braves system. As a coach and manager, he has also spent time with Atlanta and the Boston Red Sox. His stop with Boston included experience in a major league clubhouse. In 2000, Bailey called Fenway Park home and served as the bench coach of the Red Sox.

Jamie Vermilyea takes over in 2019 as the new Pitching Coach of the South Bend Cubs. This will be Vermilyea’s second season with the Cubs organization after serving as the Pitching Coach of the Mesa Cubs in 2018. The former MLB pitcher with the Toronto Blue Jays pitched in nine professional seasons after being drafted by Toronto in the 2003 MLB Draft. He made his MLB Debut in 2007.

Prior to the Cubs, the Tucson, Arizona native was the Pitching Coach for the Winnipeg Goldeyes from 2013-2015.

Paul McAnulty returns for his second season with the South Bend Cubs in 2019. After serving as an assistant coach in 2018, the former Outfielder for the San Diego Padres and Los Angeles Angels of Anaheim will take on the Hitting Coach role this year.

McAnulty played in five major league seasons from 2005-2010. Prior to joining the Cubs as a coach, McAnulty was a hitting coach in the Angels system from 2014-2016.

Pedro Gonzalez joins the South Bend Cubs as an Assistant Coach, having spent the last three years as a manager for the Chicago Cubs Dominican Summer League Team and two years as manager of the Venezuelan Summer League team. Gonzalez played in the Houston Astros minor league system from 2005-2009, compiling a .255 batting average with 62 runs, 18 doubles, two triples and 71 RBI in 198 games. Gonzalez signed a minor league contract as a non-drafted free agent with the Astros in 2004.

The South Bend Cubs open the 2019 season at home versus West Michigan on Thursday, April 4 before heading on the road to Comstock Park on April 6. Group and season tickets are available by calling the South Bend Cubs Main Office at (574) 235-9988.