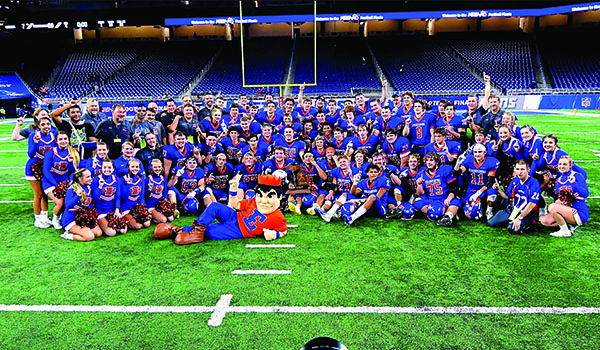 Edwardsburg won the school’s first state championship in football with a 28-7 win over Chelsea in the Division 4 title game in Detroit. (Leader photo/KELLY SWEENEY)

On Friday night at Ford Field in the Division 4 championship game, Edwardsburg’s defense rose up and led the Eddies to a 28-7 victory over Chelsea and the school’s first state football title.

“Last year we were shocked to be here,” Edwardsburg Coach Kevin Bartz said about the disappointing 42-31 loss to Grand Rapids Catholic Central. “This year we were more focused and ready to take care of business. We finally got the job done after 24 years. But there are many that never get this far.”

The Bulldogs (10-4) were able to contain the high-octane Edwardsburg offense throughout the first half, and trailed just 8-7 as the teams headed off the field at halftime.

The Eddies’ coaching staff made some halftime adjustments and Edwardsburg got back on track offensively and were able to outscore Chelsea 20-0 in the second half.

“I told the guys that we had to clean up what we were doing,” Bartz said. “We made the change to outside, which allowed us to open the middle for (Caden) Goggins and the rest of the backs.”

The Eddies took the opening second-half possession and marched into the Bulldog red zone.

Facing a fourth- and-2 on the Chelsea 5 yard line, Mac Gaideski found pay dirt. Harvey added the 2-point conversion and the Eddies led 16-7 with 6:39 left in the third quarter.

Chelsea would start at its own 36-yard-line on the ensuing possession and face a third and 16 twice on the drive. Despite converting on those plays, the Bulldogs ended up turning the ball over on downs at the end of the third quarter.

Both teams turned the ball over on downs to open the fourth quarter with Chelsea turning it over on their own 22-yard line.

Three plays later, Harvey scored on a five-yard run to give the Eddies a 22-7 lead with 3:10 left in the game.

On the following play from scrimmage Chelsea turned the ball over as Cayden Calhoun recovered a Hunter Neff fumble on the Eddies 47-yard line.

Goggins sealed the deal with his second touchdown of the game and 31st of the season, this one from 53 yards out. He would finish with game with 15 carries for 125 yards and 1,482 rushing yards on the season.

The game started off a bit rocky for the undefeated Eddies as on its opening possession, Chelsea stopped Edwardsburg on fourth down at its own 34-yard line.

The Edwardsburg defense was able to hold as Chase Sager sacked Chelsea quarterback Quinn Starkey to set up another long third down. Starkey took a chance throwing deep into the end zone, but Bryce Blue intercepted the pass ending the threat.

Three first down runs by Isaiah Mitchell (four yards), Harvey (19 yards) and Sager (43 yards) set up a Goggins five-yard touchdown run, his 30th of the season.

The Eddies would lead 8-0 after the first quarter.

Chelsea capped a 64-yard drive when Starkey found Neff on a four-yard touchdown pass to close the gap at 8-7.

Both teams traded turnovers in the second quarter.

This is Edwardsburg’s first state championship since volleyball in 1977 and the first football state title for southwest Michigan since Constantine in 2004.

“I couldn’t ask for anything else in this world,” said an emotional Sager said after the game.

“I’m speechless, this is so great,” Goggins said. 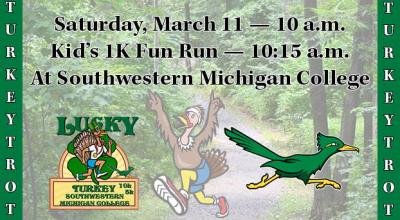