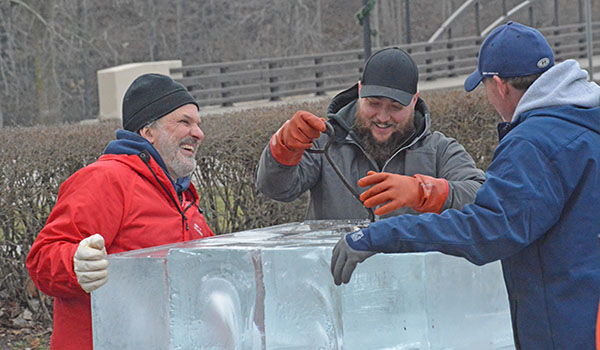 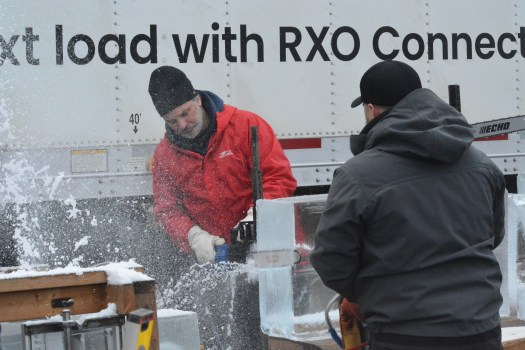 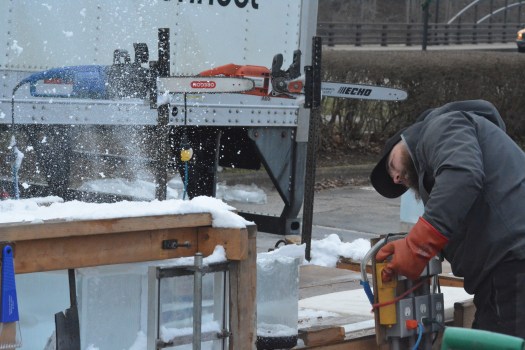 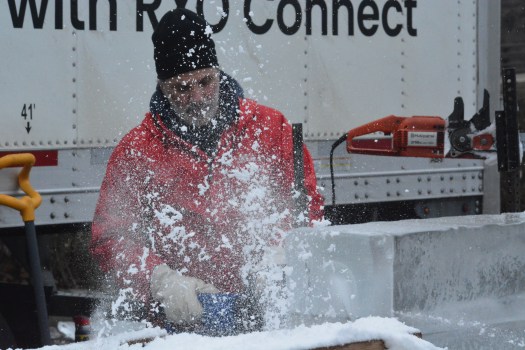 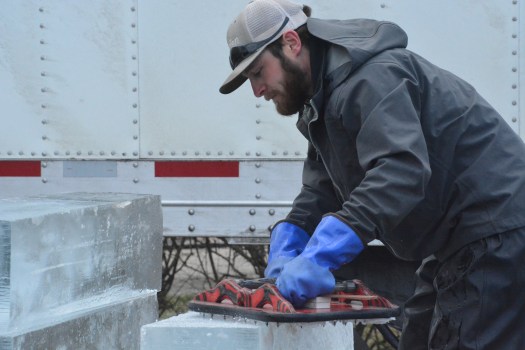 NILES — Approximately 32 tons of ice arrived in Riverfront Park last week, destined to be transformed into works of art at the 19th annual Hunter Ice Festival.

Hosted by the Niles DDA Main Street , the ice festival will kick off Friday and last through Sunday. Festival goers can expect to see sculptures scattered throughout the downtown and sponsored by local organizations and businesses.

Additionally, those who visit the festival can participate in numerous activities, such as witnessing live carvings and playing interactive games like ping pong on a table carved from ice.

Hunter Ice Cream will be sold and people can warm up at various downtown businesses.

On Monday, sculptors were hard at work maneuvering and preparing the ice as the snow fell throughout the day.

Danny Bloss, of Niles, is an ice sculptor who has been part of the festival since it began 19 years ago. On Monday, he worked with the ice alongside other sculptors: Aaric Kendall, from Illinois; Josh Niven, of Buchanan and Harvey Russell, of Missouri and more, working to bring their frozen works of art to life.

The sculptors will be working with above-average temperatures this week, which forces them to alter their gameplans.

“It affects our schedule as far as carving, of course,” he said. “You have to do things a little bit later and closer to the event. We’re trying to get everything prepped so that when it comes time to do what we need to do, we’ll be ready.”

Bloss said that he was inspired to take up ice sculpting by a group of friends. According to Niven, a friend who was a local chef in the area exposed him to the ice sculpting world.

“He was teaching a class at my local counter school here and I said ‘man, those saws look dull’ and he’s like ‘well get in here and sharpen them’,” Nivens said. “So I did, I picked up a saw and never set it down.”

Niven enjoys using the tools of the trade to tap into his love for art.

“I was never an artist growing up,” he said. “Recently, I starting force myself to be able to learn more about art and craft and the process of anatomy and it really became a real love. For sure. With tools, I got all the fun goodies. What you really need are a couple of little tools to make some really good stuff.”

Niven has created many a sculpture in his years as a professional ice sculptor. Every year, he makes his annual pilgrimage to the World Ice Art Championships in Fairbanks, Alaska.

“I go out there for about two months out of the year,” he said. “It’s kind of my mecca for me, at least for the United States. I’ve got dreams of going to Europe and Russia for the international competitions. Not yet, but that’ll come.”

Bloss and Niven are looking forward to creating lasting memories not only for themselves, but for families and festival goers alike.

“Niles does an awesome job and since  I live here, I love seeing all the people come up to see our town,” Bloss said. “That’s what it’s about, it’s about getting families out, bringing your family out here, your kids, your grandparents and walking the streets and seeing the sculptures and hopefully enjoying them.”

“It means the world to have something this local,” Niven said. “I usually have to travel to Central Indiana or Wisconsin but something right here in my neighborhood means a lot to me. I’m a big family guy, so I love that my family can come out and see it.”