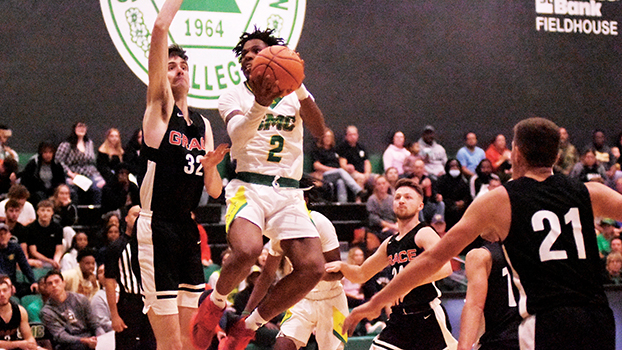 MUSKEGON — The holiday break is over for the Southwestern Michigan College men’s and women’s basketball teams.

The Roadrunners headed north Wednesday night to take on Muskegon Community College in a Michigan Community College Athletic Association non-divisional doubleheader. It was the second time this season that the two teams have squared off.

The teams split their respective games with the Jayhawks, as the SMC men’s team defeated Muskegon 66-56, while the women’s team dropped a 61-44 decision. The Roadrunners swept the Jayhawks at the 1st Source Bank Fielder House Dec. 3.

Niles’ Mikel Forrest exploded for a game-high 25 points to lead the Roadrunners, who improved to 7-4 with the win.

Forrest was 10-of-20 from the field, including 3-of-9 from 3-point range. He also had seven rebounds, a steal and a block.

Both teams were a bit rusty shooting the basketball. Southwestern Michigan shot 37 percent from the field and Muskegon shot 31 percent.

The Roadrunners grabbed a 29-26 halftime lead and then outscored the Jayhawks 37-30 in the second half.

Rashawn Bost (Evanston, Illinois) added 14 points, seven rebounds, three steals and a pair of assists to the SMC totals, while Niles’ Nate Goins came off the bench to score 10 points. He also had six rebounds and a pair of steals.

The Roadrunners are back in action Saturday as they host Grand Rapids Community College in another non-division contest. Tipoff is set for approximately 3 p.m. following the women’s game with the Raiders.

The Roadrunners (7-4) led 22-16 after one quarter, but were outscored by the Jayhawks 45-22 over the final three quarters.

Like their male counterparts, the Roadrunners were a bit rusty shooting the basketball as they were 17-of-46 from the field (37 percent), including 5-of-14 from 3-point range.