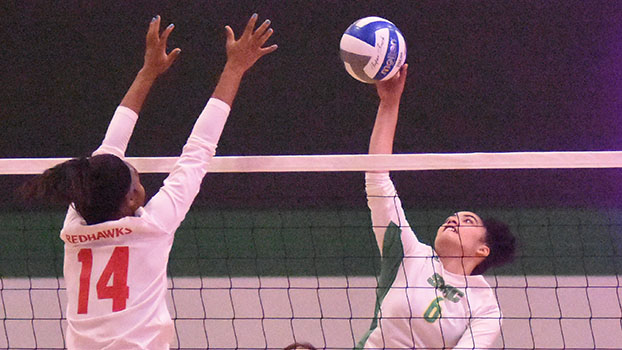 The Southwestern Michigan College volleyball team was knocked out of the postseason by Terra State Friday. (Leader file photo)

Southwestern Michigan completed its inaugural season with a 14-20 overall record. The Roadrunners finished fourth in the Michigan Community College Athletic Association Western Division with a 5-7 record and won the play-in game over Schoolcraft of the Great Lakes tournament.

“This team far exceeded my, and our school’s, expectations this season,” said SMC Coach Jenny Nate. “They came together and believed in a vision of what SMC Volleyball could be — even when I was recruiting them, and we didn’t have a gym or a program yet. They bought in, showed up on Aug. 1, and gave us and each other 100 percent effort every day of this season. They are all freshmen and were expected to finish second to last in the preseason poll. I get it. We were a total unknown with no record and no stats. We had to earn every single point and had to win to show the state and beyond a glimpse of what we can be and what we are building.”

The Roadrunners went 4-1 at its first tournament of the season. They split with eventual MCCAA Western Conference champion Lake Michigan College and North Central Michigan College in its first match in the 1st Source Bank Fieldhouse.

Southwestern Michigan road the highs and lows of building a program from the ground up. It battled through injuries midway through the season, and despite losing one of its starters during the Great Lakes District A Tournament, it still managed to go 2-2.

“Their grit, heart, determination, and work ethic resulted in a fourth-place finish in the conference and a postseason run in the Great Lakes District A Tournament, where we made it to day three,” Nate said. “We faced adversity, injuries, and even lost one of our key starters to an injury yesterday. But this team stayed focused on the mission, rallied around each other, and played to win. I am so incredibly proud to be their coach.”

Nate said her team had a strong support system from day one.

“We want to thank the SMC staff, students, other athletics teams and coaches, all the families, and the entire community for supporting us this season,” she said. “We feel the love, and it inspires us to strive for greatness. A special thank you also to all the various conference teams and coaches who were in the stands cheering us on the past three days when they weren’t playing themselves. That’s how it should be. Total class. We are grateful for an incredible season one and are already working on season two. Get ready. We’ll be back.”

For complete statistics from the Cuyahoga and Terra State matches, click here.