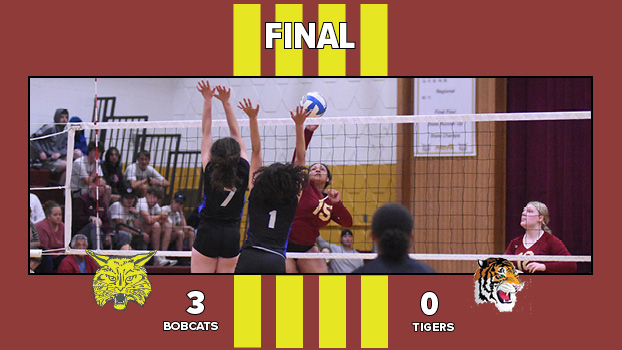 Maggie Weller led Dowagiac with nine kills, along with a pair of blocks and two digs. Alanah Smith added eight kills and two blocks, while Caleigh Wimberley finished the night with seven kills, five digs, a block and an ace.

“Tonight the girls played a fantastic game,” said Dowagiac Coach Amber Todd. “The lineup was different with Tessa Deering, who is a freshman that has been moved up to varsity. She did a great job playing at a higher level this evening. Abbey Dobberstein also stepped into a new role this evening as libero. Abbey did a great job in serve receive and defense, with a total of 14 digs. Brooklyn Smith ran a great offense feeding the ball to our middles Alanah Smith and Maggie Weller.”

The Bobcats improved to 15-4-3 overall and 3-1 in the Lakeland Conference with an easy 3-0 win over Benton Harbor.

Addy Drotoz and Clara Depriest had a team-high 10 aces, while DePriest also had five digs, 16 assists and two kills. Drotoz contributed a kill and a block to the Bobcat totals.

Ryli Burks had 10 kills and 17 assists, while Alexis Millirans and Atyanna Alford both finished with 16 digs.