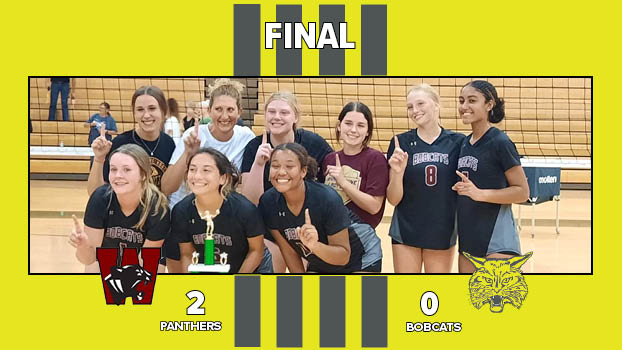 WATERVLIET — The Brandywine volleyball team got back on the court after having to cancel three matches last week.

The Bobcats, who won the Coloma Early Bird Invitational Aug. 20, finished second at the Watervliet Invitational Saturday, falling to the host Panthers in the championship match 25-19 and 25-16.

Kadence Brumitt led the Bobcats with 73 kills to go along with 24 digs and three blocks. Clara DePriest had 112 assists, 23 digs, eight aces, four blocks and 12 kills, while Kallie Solloway finished with 20 kills and 23 digs.

For the second straight weekend, the Niles volleyball team played in back-to-back tournaments.

On Friday, the Vikings went 3-2-1 at the Wolverine Conference Preseason Tournament hosted by Otsego. On Saturday, Niles traveled to Caledonia to compete in the WMVOA Scholarship Tournament. The Vikings were 1-2-2.

“We’ve played a lot of volleyball in the past nine days,” said Niles Coach Samantha Zimmerman. “We’ve learned to play some really good volleyball, pushed through adversity, worked through players playing different positions, and gained a lot of experience for our younger players. We’ve learned a lot of ourselves and our team over these past nine days. I can’t wait to use it all and get back to practices next week. We get a break now until we play at Edwardsburg on Sept. 8 for our second Wolverine Conference match.”

Senior Jillian Bruckner continues to be a force at the net for the Vikings. In the course of two days, Bruckner had 76 kills and 28 blocks.

Complete statistics can be found online at leaderpub.com in the Daily Data section.