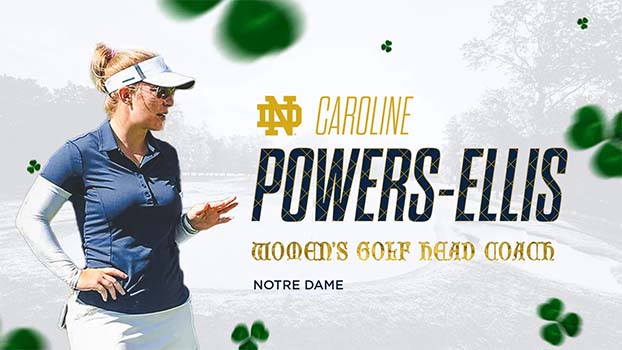 SOUTH BEND — Former Epson Tour competitor Caroline Powers-Ellis has had her foot in many golf industry doors. She’s competed collegiately and professionally but hung up the clubs to coach and mentor a new generation.

Before accepting the Michigan State University women’s golf assistant coach position, Powers-Ellis played on the Epson Tour for three and a half years where she recorded 11 top-20 finishes.

“Coaching was something I always thought I’d get into,” said Powers-Ellis. “Maybe not that soon because I was living the dream, but it seemed like it was a good opportunity and a good thing to do.”

Powers-Ellis took the assistant coach position at her alma mater and stayed with the team for six seasons. She says there were very few places she thought she would leave Michigan State for, until Notre Dame University had an opening.

“When I got the phone call, they said they’d like you to be our next head women’s golf coach,” said Powers-Ellis. “I was absolutely thrilled.”

The newest Fighting Irish Women’s Golf head coach recently arrived on campus to begin her journey. The timing was impeccable, as the professional tour she formerly played on makes a stop in South Bend, Indiana for the Four Winds Invitational.

She was able to reconnect with staff and current players, as well as give advice at the pairings party earlier in the week. Powers-Ellis says the community is lucky to host an event and see the hard work these women put into their careers.

“A lot of people don’t know what that looks like or how good they really are,” said Powers-Ellis. “I think it helps grow the game of golf and the respect for what they do on a weekly basis.”

Looking back on her time with the Epson Tour, Powers-Ellis says she was “acutely aware” of how fortunate she was to have the opportunity to live out her dreams. Her words of wisdom to current and future players are to always go back to where it started.

“I think the most important thing on the good weeks and the bad weeks is to remember why you started in the first place,” said Powers-Ellis. “Whether it’s the more challenging weeks or months, they’re preparing you for something.”

Powers-Ellis’s professional career prepared her to step into the world of coaching, and now she’s prepared to help others take a similar path.

“We need women to be in these roles,” said Powers-Ellis. “And to be mentors to college women. The opportunities are there.”