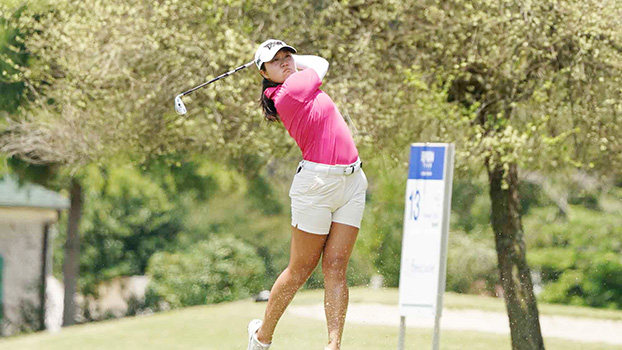 August Kim is a five-year veteran of professional golf, has been joined on the Epson Tour by her sister Auston, who is in her rookie season. Both are in the Four Winds Invitational field this weekend at the South Bend Country Club. (Photo courtesy Epson Tour)

SOUTH BEND — For the Kims, most family road trips are not what people expect. They travel as a family of four to see new places… and golf courses.

Though this may seem like a normal vacation, August and Auston are going for business — to compete for an Epson Tour title.

“Our family has always taken golf as a family expedition,” said the Kims’ oldest daughter, August. “The fact that it’s always been like this is helpful. When you have your family with you through the highs and lows, it just makes everything a little easier.”

August has been playing professional golf for five years, while her younger sister, Auston, is in her rookie season on the Epson Tour. Auston feeds off August’s experience and wisdom and loves every minute of getting to play with her big sister.

“It’s really cool,” said Auston. “I played Stage I and Stage II last year, and August was able to give me advice and help for that. Being out here with her gives me a lot of energy.”

Rather than seeing Auston as the annoying little sister following her around, August also takes in the special moments of achieving their dreams together.

“It’s been fantastic,” said August. “Auston and I have been playing together since we were tiny. To get to this level together is just really special.”

The sisters also have two caddies who hold a special place in their hearts. Their mother will sometimes caddie for August, while their father is on the bag each week for Auston.

“I love having someone reliable on the bag,” said Auston. “Dad knows me better than anyone, so I’m really fortunate to have him.”

While Auston is happy to have her dad close every day, she’s also thankful for her mom and sister’s proximity and support.

“Having the entire family out here is really cool,” said Auston. “It’s a big treat and makes traveling a lot easier. It’s really great to have three people that I can really lean on and count on every day.”

August takes her older sister duties very seriously, giving Auston as much support as she needs while also giving her space.

“One of the things I’m very cognizant about, as an older sister, is waiting until Auston comes to me if she wants help,” said August. “I don’t want to give her too much. But we’ve always been great at communicating with each other. She’s my favorite person in the entire world.”

August’s love for her sister is felt and reciprocated, as Auston gushes about having the best cheerleader.

This is the first time the duo has played on the same competitive level together, as their five-year age gap did not allow them to play collegiately at the same time. This may also be the last time, as August prepares to make the jump into her next chapter of life.

She’s in the process of applying to medical school, which has been a long-term dream of hers since she was a child. While she may not be fully in the golf world come next season, August will always keep her foot in that door — especially for her sister.
“I’ll be there for her however I can,” said August. “Maybe I’ll even come out and caddie for her if she needs me to.”

Whether August returns to the course to take her father’s place on the bag or just stand on the sidelines, her mission remains the same — be the biggest cheerleader Auston’s ever had.

“A common theme in our family, and for me to Auston, is always being there for her,” said August. “Hopefully that will stay the same.”