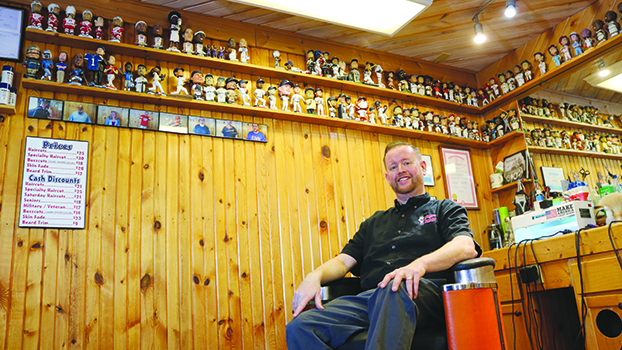 DOWAGIAC — When you walk into Bakeman Barbers, “The King of Cuts,” the nearly 300 bobbleheads that adorn the walls will give the customer the nod of approval.

After all, a bobblehead never says no.

When Pat Bakeman was making his final plans to open his barbershop in downtown Dowagiac in 2005, he knew he wanted something different.

“I knew I wanted to have my own barbershop, so when I first bought this place it had all kinds of different stuff,” he said. “I had a couple of bobbleheads. Sammy Sosa was the first one. I bought it for $1 at a grocery store, and it was random. Then the Pistons won the [National Basketball Association] championship, so they were selling those pretty cheap.”

Bakeman’s display started with just one shelf of his favorite bobbleheads. From there it grew. Today, his shop is surrounded by shelf after shelf of nodding figurines.

“We had a couple of people bring us bobbleheads,” he said. “Then I went to a game and I bought a bobblehead. We just decide to go with bobbleheads in here. It is kind of a nice look for us.”

While he admitted that former Chicago Bears linebacker Brian Urlacher is his favorite player, Bakeman said that there is no one direction his collection takes him. It varies from sports players to politicians to biblical figures.

He also is not sure just how many of the little statues he has lining the walls.

“That is the fun part of this,” Bakeman said. “We are not sure, and there are so many of them, but we think we are close to 300. We always have my kids come and see them here, counting them. Whoever says the last number, that is the number it is.”

Patrons often talk about the figurines. Among the most notable is Ronald McDonald.

“We didn’t just throw these up there. They are strategically placed,” Bakeman said. “The Detroit side is on one side and the Chicago side is on the other. All the baseball players are grouped together, so are the basketball players and football players.”

“We do not discriminate,” Bakeman said. “We even have a Pope. We even have the greatest athlete — Joey Chestnutt [Nathan’s Hot Dog eating champion]. We started buying presidents, or at least who is running. My kids come in here and clean. My daughter asked me who Hillary Clinton and Mitt Romney were. I told her they ran for president, but didn’t win. She said they shouldn’t be with the presidents, and they should be by the door because they lost.”

While he does not look for specific bobbleheads, Bakeman does keep an eye out for a great deal on one that he would like to see on the wall.

Customers routinely tell Bakeman he needs more shelves. That might happen at some point, but he did save room on his wall in case the Chicago Cubs ever won the World Series. As soon as that happened in 2016, he purchased the starting lineup.

“I ordered them,” he said. “I will get rid of something when the Bears win the Super Bowl, and they will go up there.”

He would like to own some bobbleheads, but he tempers his enthusiasm for a particular player when it comes to what he will pay for one. He also knows that his collection of bobbleheads is probably not coming home with him when he retires.

“When I am old and I decide to sell this shop, the bobbleheads come with it,” he said with a laugh.

Even with nearly 300 to his name, Bakeman he can recite the story behind nearly each one.

“I can almost remember where I got them from,” he said. “I got the college football one from the College Football Hall of Fame. My wife has gotten me a few. My mom got me [the late Notre Dame Coach] Ara Parseghian for Christmas.”

If Bakeman were ever to take down his bobblehead collection in favor of other barbershop decorations, his first choice would be signed baseballs. However, he said he has no immediate plans for change and that the bobbleheads are here to stay.