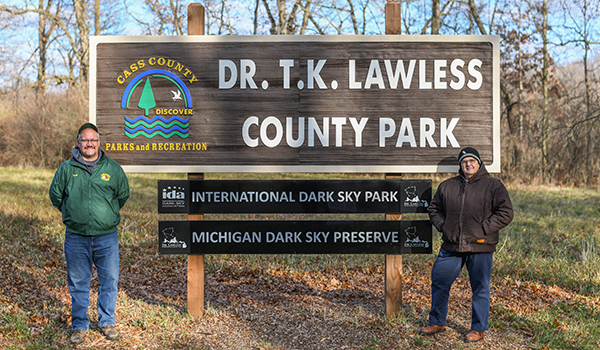 When Edwardsburg resident Robert Parrish was 7 years old, Santa left him a telescope under the Christmas tree.

While it may have been a cheap toy made of plastic, the telescope soon became his most prized possession, matching the space-themed curtains in his bedroom and the glow in the dark stars lining his ceiling. Parrish’s father, Andrew, taught him to use the telescope underneath clear night skies, their fingers tracing the outlines of constellations and galaxies.

“Half the time, we didn’t even know what we were looking at, but it sure was fun,” Parrish recalled with a laugh. “The telescope was kind of what pushed me over the edge. I’ve been a star nerd ever since.”

These days, 66-year-old Parrish knows what he is looking at. The toy telescope and his father’s influence inspired a life-long passion for the stars in Parrish, who now hopes to inspire that same passion in others through his astrophotography and work as a Cass County Parks Board member.

Now, Cass County Parks are building off the Dark Skies movement’s momentum, and board members hope the next few years will be some of the most important and influential in the parks department’s history.

According to its website, the International Dark-Sky Association is a recognized authority on light pollution and is the leading organization combating light pollution worldwide. The association provides Dark Sky designations to parks, communities and places that fulfill the required criteria, including achieving dark sky friendly lighting, advocating for the protection of the night sky, having appropriate light readings and more. The organization’s primary goal is to fight light pollution — or excessive use of artificial light — worldwide. Its representatives claim light pollution can have severe physical and environmental consequences for animals and humans alike.

Since his childhood, Parrish has watched as the night sky he and his father so loved has become murkier, as the stars that once shone so brightly in his backyard became harder to see due to increased usage of artificial light in street lamps, neon signs and illuminated buildings. When his father died in 2018, Parrish decided to honor his memory by protecting Cass County’s night skies and seeking a Dark Sky designation for Dr. T.K. Lawless Park, a 900-acre park located on Monkey Run Road in Vandalia.

“I thought this would be a great way to remember my father,” Parrish said. “I have so many memories with my father, just looking up at the stars in our backyard. The stars back in the ‘60s were a lot brighter.”

According to Cass County Parks Director Scott Wyman, Lawless Park was chosen due to its location and already naturally occurring dark skies.

“Whatever your love of the outdoors is, you can pretty much do it all here at Lawless Park — mountain biking, hiking, bird watching, fishing, tubing, cross country skiing. This list kind of goes on,” Wyman said, walking along one of the park’s many trails. “The Dark Sky initiative just added to our activities.”

Over the next few years, Parrish estimates he poured more than 500 hours into the project of getting Lawless Park designated a Dark Sky Park. He put together a 65-page application featuring letters of support from local leaders, testified before the state legislature and organized educational events surrounding the night sky.

After years of hard work, Parrish said when he finally got the news on Jan. 5, 2020, that Lawless Park had been named an International Dark Sky Park, he broke into tears.

“I’m a big baby,” he said with a laugh. “I know my dad is a big ol’ softy. He probably would have cried too. I think he is looking down on us now and smiling about all this.”

Today, the sprawling green park’s entrance is marked with a sign letting every visitor know it is both an International Dark Sky Park and a Michigan Dark Sky Preserve.

Since receiving the first designation more than a year ago, the Cass County Parks Department has been hard at work planning nighttime events, a stargazing schedule and other educational activities as part of its efforts to promote Dr. T.K. Lawless International Dark Sky Park. In the U.S., visitors have come from as far as Missouri and Iowa to view the night sky at the park. Once, Parrish said he even spoke with someone who had been visiting from England. In total, Parrish and Wyman estimate more than 1,200 guests visited during the park’s designated Dark Sky hours, which began in the summer. In 2021, Parrish is hoping to double that number. To help encourage more attendance, Parrish is hoping to add events on select weekends to augment the stargazing, such as musical acts, yoga sessions and astrophotography courses.

“We want as many people to come here and see the night sky as possible,” he said.

“This is our first year, and it’s a pandemic year,” Wyman said. “When Robert first brought this to us, I thought, ‘this will be just one more thing to do at Lawless Park.’ It’s become so much more than that.”

Outside of the Dark Sky nights, Wyman said Cass County Parks saw a renewed interest in 2020, he believes in large part to the pandemic keeping many indoor venues closed.

“The pandemic really showed us all how important parks are to the community,” Wyman said. “The parks became important not just for physical health, but mental health as well. It’s a global pandemic, and we have still been able to accomplish what we have accomplished. It’s incredible.”

With all eyes on the parks last year due to the Dark Sky initiative and the pandemic, the department embarked on drafting its five-year parks plan, which was approved by the Cass County Board of Commissioners in January 2021. With the plan, Wyman hopes to give the parks a facelift and add a camping area to draw even more visitors to Cass County Parks to enjoy its hiking trails and other amenities during the daytime — and its dark skies at night. Eventually, the parks board would like to install an observatory at Lawless Park and a nature center within the county.

“We are building off the momentum of Dark Skies,” Wyman said. “It is as simple as that. It couldn’t come at a more perfect time. I keep telling my board that the next five years could be our best. We are excited. … One of our top priorities will be supporting Dark Skies.”

As Cass County Parks continue to expand on the momentum generated by the Dark Skies initiative and the five-year plan, Parrish has one major dream: to instill in residents the same wonder of the stars he felt when he opened that toy telescope nearly 60 years ago.

“I always tell people, no matter what they believe — whether that’s intelligent design or if they think we are here by happenstance due to science — no matter what, when we look at the stars, we are looking at our origins,” he said. “We are all made of ‘star stuff.’”