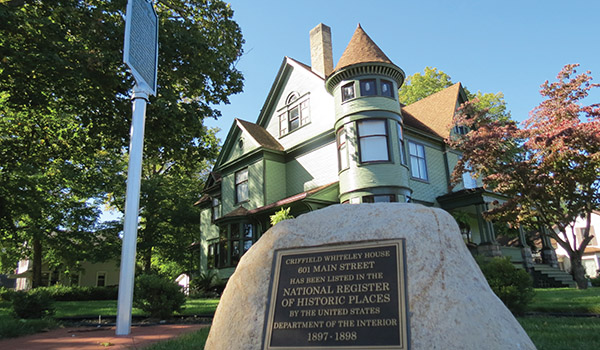 DOWAGIAC — After 100 years, one local organization has made the decision to close its doors, but it’s legacy will live on through the bonds and memories its members have created, as well as the impact the group made in the community.

The Captain Samuel Felt Chapter of the Daughters of the American Revolution celebrated its 100th  and final anniversary in October 2021, announcing it will disband sometime in 2022. Chapter Regent Paula Anderson and Registrar Jane Wagel recently reflected on their favorite memories with the group, while Wagel also shared stories of her and her late husband Robert Wagel’s genealogy adventures across the country.

End of an era

The first meeting of the Dowagiac-based Captain Samuel Felt Chapter of the DAR was hosted in 1921 at the historic Criffield-Whiteley house in Dowagiac. Sara Ethel Whiteley was a founding member of the chapter and led its efforts to honor veterans of World War II with a memorial highway and park in Cass County.

Over the years, the chapter has been involved in many community projects that promote patriotism, historical conservation and community service in the area, including marching in local Memorial Day and Fourth of July parades. They also have marked a stage coach stop near the intersection of Gage Street and Glenwood Road in Wayne Township.

Johnson said the group’s Good Citizens Contest in particular was one of her  favorites. Created in 1934, the Good Citizens Contest award is given to a high school senior who demonstrates their “dependability, service, leadership, and patriotism in their homes, schools, and communities,” according to the DAR website.

“We’re really involved as a presence, but not as a representative of any political cause,” Jane said. “The goal is to educate the populous, especially children. We go into schools and read stories or pass out flags, so we are actively involved in community organizations.”

After 100 years of community involvement, the chapter’s leadership made the decision to disband due to a declining interest in new membership, as well as the increasing age and health concerns of its current members.

According to Johnson, the group will continue to meet regularly until at least next June, and has some business to attend to in the coming months, including marking the graves of past members and making preparations for future graves of current members.

“We’re going through and making a list of all those women who have supported us over the years,” Johnson said. “So, June is the month we will be marking graves.”

The organization was much more than just a group of Revolutionary War descendants for many members, according to Johnson.

“It’s a social event as well as an organization many of us are proud of,” she said. “To pull the plug and drain the sink is really hard. We’re trying to do some things, so they still have a feeling of accomplishment and not just a sudden end and drop off of the cliff.”

Johnson added the bonds the women have created over the years have been unbreakable.

“These ladies have been a marvelous group of women to work alongside and to be a partner with them has been a joy,” Johnson said. “I’m very proud of what this chapter has done.”

Decades ago, local residents Jane and Robert Wagel embarked on a project of passion to research their family histories – a project which resulted in both Wagels finding multiple direct family connections to participants in the American Revolution. This research eventually led to Jane joining the DAR and Robert Joining the SAR.

The Wagels met while pursuing education degrees at Morehead State University in Kentucky, and the couple eventually settled in Dowagiac in 1976. Robert, who died in 2017, also earned master’s degrees in guidance and counseling and one in educational administration. He was guidance counselor for Dowagiac Union High School until his retirement in 2001, while Jane taught first grade at Kincheloe Elementary, also until 2001.

In their spare time, the couple would often travel to the Genealogy Center in Fort Wayne, Indiana to research family history.

“They have a wonderful genealogy library,” Jane said. “We’d go down there Sunday afternoon and stay ‘til they closed many, many times.”

Jane said she tried to convince Robert to stay down there for weekends at a time.

“He couldn’t sit still for that long,” Jane said. “So, I’d have to settle for Sunday afternoon, but we had good times doing it.”

While Jane was still teaching at the elementary school, fellow teacher and DAR member Margaret Hunter encouraged her to join the chapter after learning of her genealogy research.

“I did not start out to be a member of the DAR. I started out to do my family research,” Jane said. “But Margaret had told the Registrar at the time about me, so she kept calling and asking if she could help with the research. She wasn’t able to help, but that sparked an interest.”

In order to become a member of the DAR or SAR, a person must be able to prove bloodline descent from an ancestor who aided in achieving American independence. The applicant must provide documentation for each statement of birth, marriage and death, as well as of the Revolutionary War service of her Patriot ancestor.

After a while, the Wagels decided to join, as Jane had been told of her family being descendants of George Reeves, a Lieutenant in the Revolutionary War from Virginia. Jane said her research hit a snag around her great-grandfather’s time because of a 1921 fire that destroyed the 1890 census.

“I couldn’t find anything to document his birth, his death, nothing,” she said. “I knew all of it, but they don’t take my word for anything.”

Because of this, Robert and Jane drove to Kentucky in search of family records.

“I knew he was from Pike County, Kentucky and lived on the Long Fork of Shelby,” Jane said. “We went there and just started driving up and down the road and every mailbox that had the word ‘Johnson’ on it – as that was my maiden name – I stopped, and I would go in and give my spiel. Finally I found a person who was a relative of mine, who knew him and knew the cemetery he was buried in.”

Jane’s newfound relative called someone to help her get to her great-grandfather’s grave, which was up on a hill next to the remains of a house. The grave had not been damaged by weather or time, according to Jane, and contained all the necessary information for her to prove that link to the DAR.

Eventually, the Wagels made their way to the burial site of George Reeves and his family, which is enclosed by a stone wall. Reeves lived at the farm on this site, and there had been a descendant of Reeves living on the property from the day he died until the day they visited.

She said the entire family is buried inside the stone wall, and outside the wall are burial sites of all the slaves who worked on the farm.

“I’m sure gazillions of people come there for the same reason we did,” Jane said. “But that was really eventful for me because we made a really big effort from Michigan to Virginia.”

In all, Jane was able to prove ancestral connections to two others, Andrew Hood and Elizabeth Austin. She said she is aware of an additional 11, but has not done the work to document those connections.

Prior to his death, Robert was able to document and prove his connection to 13 individuals connected to the American Revolution, and served as a multi-term President of the Sauk Trail Chapter of the SAR. He was also a member of the First Families of Kentucky, The First Families of Maryland, The Society of Colonial Wars, The Founders and Patriots of America and a Charter Member of The Order of the Founders of North America 1492-1692. He also served in the U.S. Army after graduating high school.

Jane has been a member of the Samuel Felt Chapter for 30 years, and relishes in the experiences she has had over the years. She recalled a time when the chapter traveled to Battle Creek to spend time at a veterans’ care facility, and had memorable experiences visiting and interacting with disabled veterans.

“When you see the situation some of those people are in, it just makes you cry,” she said. “There was a young lady there, and she was in a wheelchair bed, and she wanted to play BINGO. So, we played with her.”

Jane said her experiences with veterans are some that she will remember the most during her time as a member of the DAR.