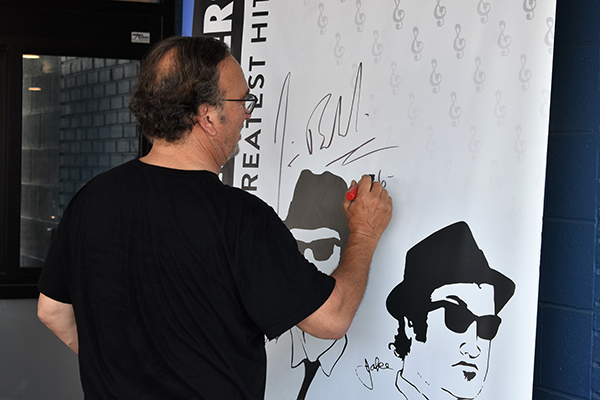 CASSOPOLIS — They’re on a mission from God. They’re putting the band back together.

Dan Aykroyd and Jim Belushi are scheduled to perform a Blues Brothers concert at Riverfront Park in Niles on Saturday, August 20 as part of the Blues’d and Infused cannabis music festival presented by Float. The event is co-sponsored by Belushi’s Farm brand of cannabis products, as well as Highway Horticulture Productions.

Belushi announced the concert on Tuesday while in Cassopolis for a meet-and-greet at Sunset Coast Provisions. Highway Horticulture, which owns Sunset Coast, is partnering with Belushi’s Farm to be the exclusive distributor of Belushi’s Farm products in Michigan.

At the event, Belushi said the band will be doing a full 90-minute Blue Brothers show with his 11-piece band the Sacred Hearts. From a B3 Hammond organ player to a horn section and the Blues Brothers themselves, Belushi said he was excited to bring the show to town.

“It is a show band,” said Belushi, triumphantly emphasizing each word. “It’s going to be a ball.”

The event will take place from 2 p.m. to 9 p.m. General admission tickets for the festival are $150, with VIP tickets going for $350. Tickets can be purchased at events.farechild.com.