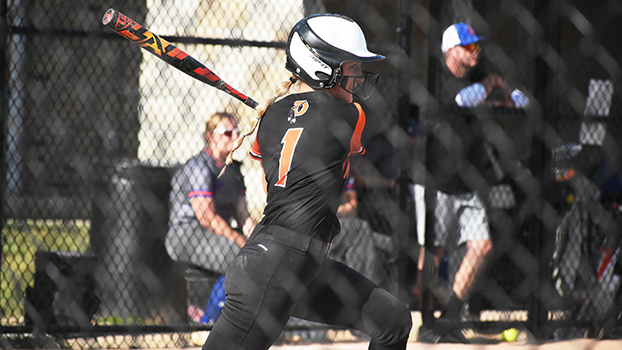 Caleigh Wimberley had a big day at the plate as the Chieftains swept Decatur Thursday. (Leader file photo)

DOWAGIAC — The regular season came to an end for the Dowagiac and Buchanan softball teams as they swept non-conference doubleheaders Thursday.

The Chieftains built on their win over Edwardsburg Tuesday night by scoring seven and eight runs, respectively, in the opening inning of their doubleheader with the Raiders.

Dowagiac scored 13 runs on just seven hits, but got another outstanding pitching performance from Sierra Carpenter, who tossed a two-hitter with five strikeouts in the first game. Carpenter helped her own cause by going 2-for-4 with a double and three RBIs at the plate.

Caleigh Wimberley was 2-for-3 with a triple and three RBIs.

“We continued to play some pretty good softball in the first game against Decatur,” said Dowagiac Coach Mike Behnke. “We got a little sloppy in two innings in the second game, but played well for the most part. Our bats continued to stay hot and Sierra pitched well again. Caleigh Wimberley had a big night with her bat collecting her first-ever over the fence home run. She also continues to run the base phenomenally, taking extra bases on any slight bobble or miscue by the defense.”

In the nightcap, Carpenter fashioned a four-hitter to earn the win for the Chieftains.

The No. 6-ranked Bucks raced out to a 4-1 lead after three innings on its way to victory in the opening game against the Comets.

The Bucks scored two runs in the fifth and sixth innings in the second game to snap a 1-1 tie with Coloma.

Buchanan had nine more hits in the nightcap, led by Alea Fisher and Kara, who both had two hits.

The Bucks will now await the winner of the Constantine-Brandywine winner in the Division 3 District semifinals, which they are hosting at 10 a.m. June 4.