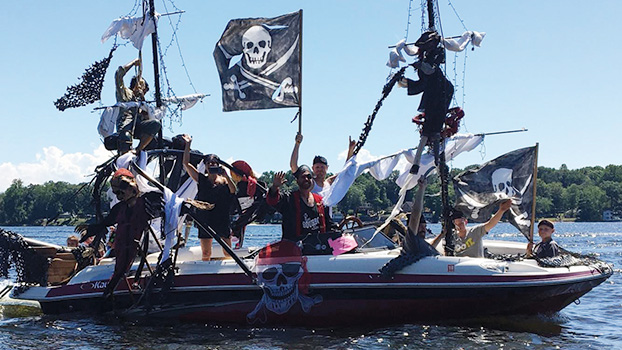 Rogue pirates do not stand a chance against the Cass County Marine Patrol this summer. (Leader file)

According to Cass County Sheriff Rick Behnke, the department used to be able to get personal watercraft from local marinas on a lease basis, but most marinas no longer offer leases due to a shortage of available craft.

“[Personal watercraft] are important for marine patrol,” Behnke said. “They are able to catch other personal watercraft that are in violation, which our other boats cannot. They also are quicker in response to people in distress on the waters. They’re easier to load and unload when you take the trailer from lake to lake.”

Behnke said the department has received a quote on two personal watercrafts for $40,000, and urged the board to act quickly. He added the marine patrol began last weekend, and will be out in full force by Memorial Day weekend.

Separately, Behnke reported the department is closer to being fully staffed after several new hires. Former Cass County Corrections Officer Jessica Myers was hired as a deputy on May 9. According to Behnke, Myers was named number one in her class at West Shore Community College Police Academy, as well as best driver.

“The only female in her class, and she’s the best driver,” Behnke said. “I thought that was pretty cool.”

Tyler Carson, meanwhile, was hired as a deputy last week. Carson recently graduated from the Kalamazoo Valley Community College Police Academy. Both new hires were sponsored and supported through the academy by the sheriff’s department, according to Behnke.

“Personnel-wise, with these new deputies, that gets us back in line,” Behnke said. “Hopefully we’ll be full strength by the fourth of July.”

• Approved a motion to approve the purchase of Zoom Webinar services for commissioner meetings.

• Approved a resolution to adopt a smoke- and vape-free workplace policy.