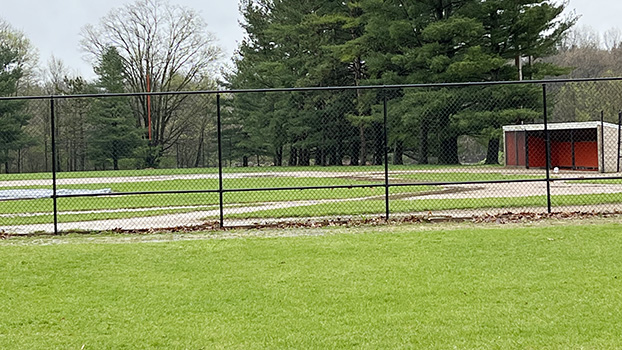 Instead of baseball players standing at Rotary Park in Dowagiac Friday, there was only standing water as rain continued to plague the high school sports season. (Leader photo/SCOTT NOVAK)

NILES — There have likely been wetter and colder springs, but for the coaches, players and athletic directors, the spring of 2022 has been frustrating.

On Friday, nearly the entire sports calendar for the six schools in the Leader Publications coverage area was eliminated by rain and cold temperatures. That has been the case more often than not since spring sports began in late March.

“Spring sports are always a challenge due to weather; this year has been particularly difficult and then add in the umpire shortage, and it makes rescheduling even more difficult,” said Edwardsburg Athletic Director Kevin Dean. As an AD, it is the one part of a job that you can’t control [the weather], so you just have to deal with it the best you can.”

Dean said that his coaches have done well in keeping the players focused.

“My coaches have done a great job of keeping their athletes focused and ready when we do get opportunities to play,” he said.

Brandywine Athletic Director David Sidenbender, who is also the Bobcats’ baseball coach, said the more events he has to cancel or postpone, the more concerned players and coaches are becoming.

“The [frustration] level is somewhat high,” he said. “People ask me if this is the worst spring ever for bad weather, and I had been saying, ‘not yet, but getting close.’ But as of today [Friday], it’s probably right there.”

Sidenbender said he has had to cancel or postpone 36 of the Bobcats’ 94 originally scheduled events this spring. He added that six more events got started, but could not be finished.

“This is my first year doing this, so I’m not sure if that is bad, but I can’t remember a cooler spring this late for sure.”

“The frustration level between the coaches is fairly high because the coaches and the athletes have invested so much time and not getting to complete is frustrating,” he said. “On the athletic director side, it is frustrating, but we can only control so much, and the weather isn’t one of them. It takes a lot of rearranging schedules and bussing assignments to get games rescheduled and this doesn’t mention the lack of officials that are available.”

Even though spring sports has entered the final month of the regular season, all three athletic directors say that they have not had to outright cancel too many contests yet.

Dean said at Edwardsburg, they have tried to get creative in order to get as many games in as possible.

“We moved up the varsity baseball game with Dowagiac from a Friday to a Thursday to beat weather, but had to use umpires who had originally been assigned to do a JV game here [our opponent canceled on us because they had to make up a conference game],” he said. “On Wednesday, we dropped a non-conference varsity baseball game versus Gull Lake because we needed to play a conference opponent [Three Rivers] that was rained out on Tuesday, but softball-wise we were unable to find umps so had to move to a date next week.”

Dean added that the Eddies are still on track to get 38 games in for softball and approximately 30 games in baseball.