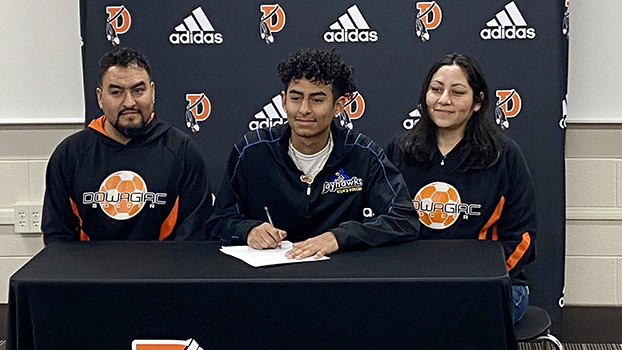 Saavedra is also a four-time Division 3 All-District selection, and a two-time All-Region, first-team All-Wolverine Conference and team most valuable player.

He picked Muskegon over Olivet College and the University of Saint Francis.

“The reason I chose this school was because I felt like this option was a better route for me personally, and I like the atmosphere thereafter training with the team,” he said.

Saavedra, who is the son of Carmen Mancera and Sergio Saavedra, plans to study business.

The Jayhawks ended their season with a 2-1 loss to No. 7-ranked Southeast Community College of Iowa in the NJCAA National Tournament. It was the fourth consecutive year Muskegon had reached the national tournament.

The Jayhawks qualified for the tournament by defeating Schoolcraft College 2-0 in the NJCAA Region XII Finals. They finished the season 11-6-3.