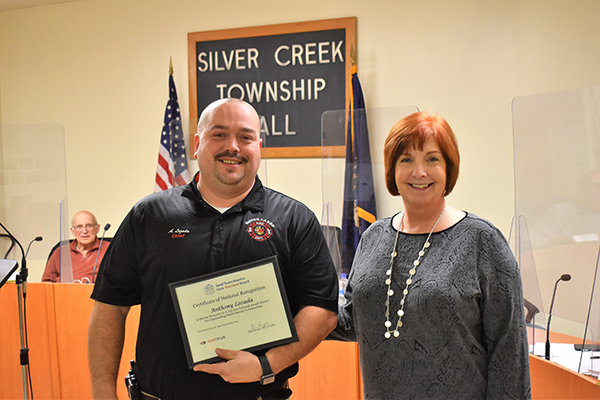 After nominating Sister Lakes Volunteer Fire Department Chief Anthony Lozada for the Civic Plus 2021 Small Town America Civic Volunteer Award last year, Silver Creek Township Clerk Lori Behnke presented Lozada the a with the certificate honoring him as a top 100 finalist out of more than 700 nominees for the national honor.

“Thank you so much for all you do for our community,” Behnke said, as she handed the certificate to Lozada. “You do a great job. … You just volunteer so much of your time and effort.”

The annual Small Town America Civic Volunteer Award is given to extraordinary public service volunteers in towns with populations less than 25,000. The eventual first-place winner of the award will be given $20,000, with $10,000 going to the first runner-up and $5,000 to the second runner-up.

In her nomination, Behnke praised Lozada’s dedication to not only his fire chief duties, but the time he donates to running local safety programs and other community activities. At the fire department, Lozada has worked to improve response times, written and received a grant for updated personal protective equipment and air packs for all members of the fire department, and spearheaded the efforts to add a second fire station in Sister Lakes – which is expected to be operational in 2022.

“Anthony clearly loves his community – all of his community, not just his own department,” Behnke wrote in her nomination. “Anthony is a positive, driven leader in our community. He is a true professional in this demanding volunteer position.”

When he heard he made the Top 100, Lozada said he does not do what does for any recognition.

“Anything for the community,” Lozada said. “That’s kind of where my heart is at.”

“I look at it as the fire department does well because of the membership it has,” he said. “Those guys are the driving force behind that place. They are the ones who make that place look good. I steer the ship, but I give them all the credit. I’ve got the best guys in the business as far as I’m concerned.”