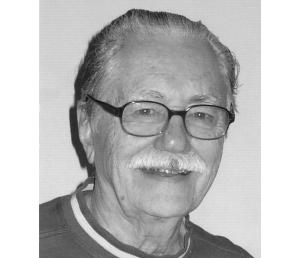 Robert graduated from South Bend Central High School, class of 1945. Robert furthered his education and graduated from the University of Notre Dame and remained a very proud alumni. He served his country proudly in the U. S. Navy being honorably discharged in November of 1946. Robert then enlisted in the U. S. Army Corps of Engineers and was honorably discharged in 1957 then began a career at Bendix Corporation, as an accountant, retiring after thirty-eight and a half years of service. On June 29, 1952, he married the late Patricia A. McIntyre at a ceremony in Niles.

He was an avid sports fan and a loyal supporter of Notre Dame. Robert also enjoyed big band era music. He and his family had many fond memories that were created at their lakefront cottage at Indian Lake in Dowagiac. Corn and sausage roasts with neighbors, spirited card games that lasted well into the night and weekend, afternoons of sunshine were reserved for a beverage or two while in a floating chair and there was always time to drop a fishing line in the water. In his later years, Robert relished going back to the lake and just looking out at its splendor. He was a proud dad, gramps and great-grandfather.

Robert is preceded in death by his parents and his wife, Patricia Keiser, in 1997.

Memorial contributions may be made in Robert’s memory to Caring Circle: Hospice or Palliative Care at 4025 Health Park Lane, St. Joseph, Michigan 49085.

The family of Robert Keiser would like to thank Caring Circle Hospice, Palliative Care, Dr. David Kraklau and Ivelisse Leonor, NP of Lakeland Urology and their caring and devoted staff.

Memories of Robert may be shared with his family at BrownFuneralHomeNiles.com.