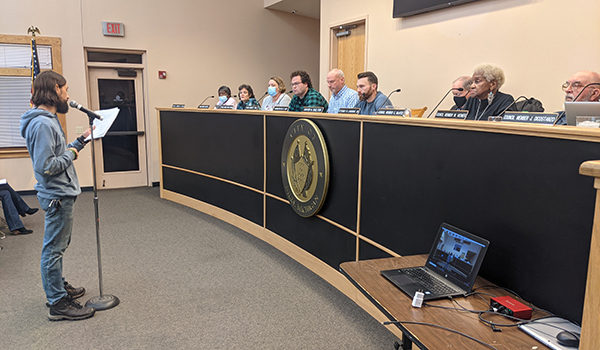 Councilmembers John DiCostanzo and Georgia Boggs both voted against the reappointments.

“I really appreciate everybody’s input and the surge of applications and interests that has come lately has been amazing,” said council member Jessica Nelson. “That’s what we want, inclusion and more involvement in these boards, so thank you. We’re going to figure out how to do that. I absolutely don’t look at this as an either-or situation, this is a yes-and. These are three volunteers who have been passionate and committed and produced results for our city.”

With the reappointments, the DDA has nine members, with Flagel currently serving as the vice president and Zeiter the secretary. Zeiter was first appointed to the DDA in May 2011, Flagel in January 2017 and Whitmeyer in March 2017. The DDA is charged with facilitating the redevelopment plan of the downtown area, with each member serving a four-year term on the board.

The DDA bylaws state that the mayor appoints members to the DDA Board, subject to the approval of the city council. Candidates for the DDA board are identified through a recruitment application and selection process that will consider the needs of its programs. The mayor may ask for assistance or advice from the DDA board, standing committees, or the DDA director in selecting voting DDA board candidates.

According to DDA Director of Marketing and Administration Lisa Croteau, the membership requirement for the DDA is no less than nine but no greater than 12, meaning the board will still have three seats available for 2022.

The DDA has become a talking point in recent weeks after several business owners expressed their dissatisfaction with the DDA appointment process, stating they have submitted applications to join the DDA but have not received feedback. During its Dec. 14 meeting to recommend the reappointment of the three members, the City of Niles Appointment Committee split the vote 2-2.

According to Croteau, the DDA has received five applications for the DDA board, two of which have yet to be responded to due to the holiday. Croteau said that interested applicants are given a list of DDA programs and projects to get involved with in order to gauge whether or not the commitment is something they can handle.

“As soon as they get involved, we’ll move the ball forward,” she said. “It’s not as simple as just saying, ‘I want a seat, I need a seat, give me a seat.’ There’s a helluva lot more that goes on that the board does for this program and for this community than just sitting at a table.”

During the public comment portion of Monday’s meeting, community members asked the council to refrain from reappointing the DDA members before reviewing the applications of those who have submitted applications.

“I’m not against anyone that is up for reappointment,” said The Rage co-owner Chance Smith. “I just want to see the submitted applications looked at before you make a decision tonight.”

In light of the weeks-long discussions involving the reappointments, Flagel addressed the council during the public comment to make his case for reappointment.

“Since January 2017, I put in more hours, sweat and even tears — especially in the last year — than any other member of Niles Main Street. … I have no agenda, I am a volunteer. I may not own a downtown business, but I think the voice of those business owners who are unable to join the board themselves. The idea that my voice as a community member and a taxpayer is somehow less valuable is ridiculous. The voices of business owners, community members, corporate representatives and artists together are what have led to numerous and measurable successes of Niles Main Street.”

One of two council members who voted against the reappointments, DiCostanzo said the DDA should be to downtown businesses what the city council is to the city.

“I think it’s unfortunate that we’re going to let emotion get involved in this decision,” said council member John DiCostanzo. “It’s a business decision. … In my view, DDA board members should be acting on behalf of the DDA much in the same way that the city council members act for the city, representing the business owners downtown and representing the community.”

DiCostanzo believes the current DDA board selection process is flawed, precluding busy business owners who would be good representatives on the DDA board.

“They’re busy running their businesses,” he said. “They don’t have much time to volunteer. I really appreciate the support that Justin gives to the city and downtown businesses. That doesn’t mean he needs to be a board member.”

According to DiCostanzo, it is time to move in a new direction and bring new voices into the DDA. He voiced his support of Stephanie Reno of SLR Pilates and co-owner of Trap House 24 SLR, 219 East Main St., who during the Dec. 14 city council meeting stated she has filled out two DDA applications dating back to March.

“I think it’s time to rethink the selection process, which is decided by that board,” he said. “If the members who think differently than the current members can’t get onto the board then they’re never going to be changed. We need some representation, strong representation. I keep hearing that we have another three openings after these three. Well, we have a very qualified candidate whose approval has been held up indefinitely for I don’t know how long. I believe she meets all of the requirements and the DDA board continues to hold up her appointment. I personally will not vote for another appointment to the DDA until we can have a vote for Stephanie Reno.”

Nelson reiterated her excitement regarding the renewed interest in the DDA and that she believes the three reappointed members will continue to do great work.

“Politics is all the art of controlling the interpretation of what’s going on, and everybody’s coming to this with emotion, which is sometimes very much warranted,” Nelson said. “We do have to look at it with a clear head as well. But in the end, what matters is people who show up day after day and I just don’t see why we would turn away people when there are three open seats. If we have five good applicants sitting out there, that means we’re gonna have great applicants in front of us when we reconvene after the new year.”