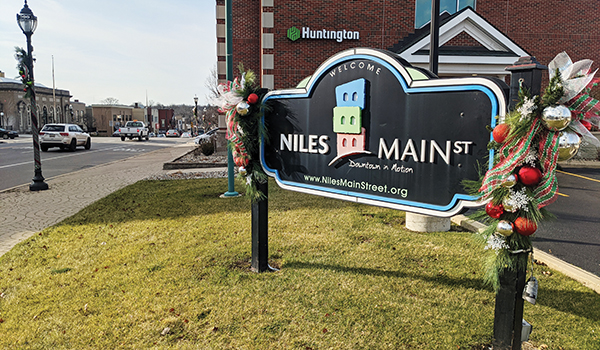 NILES — The City of Niles Appointment Committee on Monday was split 2-2 over whether to approve the reappointments of Justin Flagel, Fredda Zeiter and Sandy Whitmyer to the Niles Main Street Downtown Development Authority for 2022.

Gretchen Bertschy and Charlie McAfee voted in favor of the reappointments, while John DiConstanzo and William Weimer voted against.

As the appointment committee has no tiebreaker rule, the results of the tied vote will be presented to the city council at its Dec. 27 meeting, where the council will vote whether or not to approve the reappointments.

The DDA currently has nine members, with Flagel currently serving as the vice president and Zeiter the secretary. Zeiter was first appointed to the DDA in May 2011, Flagel in January 2017 and Whitmyer in March 2017.

According to DiCostanzo, the membership requirement for the DDA is no less than nine but no greater than 12.

Bertschy voted in favor of the reappointments, adding that the trio would be needed as the DDA prepares for upcoming events including the Hunter Ice Festival.

“My concern right now is I know that with the Hunter Ice Festival coming up, the work that these people do can’t even be measured,” she said. “There is just so much going on, and all nine individuals carry a load of responsibilities. If we don’t address these three appointments, whatever responsibilities those three carry would then have to be absorbed by the remaining six in order to maintain appropriate procedure within the DDA.”

DiCostanzo disagreed with Bertschy and said the three individuals would still be able to contribute to the festival if they wished to remain involved as non-DDA members.

Stephanie Reno, of SLR Pilates and co-owner of Trap House 24 SLR, 219 East Main St., and Bill Lakeman, of Four Flags Antique Mall, 218 N. Second St., took to the microphone during the city council meeting expressing their desire to pursue positions on the DDA as downtown business owners who live outside city limits.

During the public comment section of the city council meeting, Reno asked the council and appointment committee to postpone any decisions regarding appointments until the DDA provides evaluations on each member’s performance during their time on the board.

“It’s extremely important for the business community to have people in these positions that support us that have a voice for us and have the experience behind them to lead downtown in a new direction of a thriving business community,” she said. “These board seats require energy, time and passion, not just showing up for a meeting and voting on what’s placed in front of them.”

According to Reno, she has filled out two DDA applications dating back to March. DDA members are appointed by the mayor and reviewed by the appointment committee before being subject to approval by the city council.

“I have fulfilled every request, and every requirement with DDA but have been refused a spot,” she said. “I am not the first qualified business owner who is running into this, but I’d like to be the last.”

Reno went on to say that placing people in DDA positions that are agreeable and vote according to a certain agenda is an “unethical business practice.”

“We need to get away from that immediately,” she said. “We need many people with different ideas, perspectives, outside experience, higher education, etc. to explore the endless potential and possibilities of what our community can be. I feel it’s time to hold leaders accountable. If our taxpayers and property owners of downtown Niles fund the DDA, it’s time for the DDA to fully comprehend that we do have a voice. We will be heard, and we’re not going anywhere again.”

Instead of reappointing Flagel, Zeiter and Whitmyer, DiCostanzo believes it is time to move in a new direction and bring new voices into the DDA.

“I think this suggestion by the business owners is that we make a change to bring in some fresh viewpoints, bring in some people who have been paying taxes that support the DDA and want to have more and better representation on that board,” he said. “Here we have a couple of business owners who aren’t even sitting residents, but they don’t have any representation on this board or even on the city council. They come here and seek their viewpoints, but they feel like they’re underrepresented. … I think that we need more diversity of opinion, and I don’t think taking somebody off that board should stop them. It might insult them, and that would be unfortunate.”

DDA Director of Marketing and Administration Lisa Croteau was on hand for the appointment committee meeting and answered clarifying questions for the committee. According to Croteau, DDA must have nine members in total by Dec. 31 to be in compliance with the state. She added that she would like to see Flagel, Zeiter and Whitmyer reappointed to the board and that if both Reno and Lakeman were appointed to the board in addition to the reappointments, the DDA would have 11 of 12 possible seats filled and would meet the necessary requirements.

“I understand that it’s an extreme position to take people off this board who have served on it for a long time, but our point is we want to get more business owners represented,” DiCostanzo said. “If you feel like they need to be reappointed, I disagree. I would rather take a stand and say, ‘let’s look at some other people.’ Why are we denying Stephanie? I don’t understand it, and I would like to see some change. We want to get some alternate points of view on that board.”

For DiCostanzo, the possibility of the DDA failing to comply with the state for having less than nine members is not his concern.

“I’m more concerned about getting better representation for the business owners to feel like they’re viewpoints and are not being represented by the DDA,” he said. “I might be in the minority, but if nobody speaks out, we’ll never make a change. I appreciate everything you do, Lisa, but I feel like I’m an advocate for some of the people who feel like they’ve been under-represented. As somebody who’s got a voice, I don’t know if I can influence my colleagues sufficiently to comply with their wishes, but I think we’ve brought some attention to it.”