2021 in review: Plenty of changes in the sports landscape

Ricky Evans retiring as Cassopolis’ boys basketball coach was one of the top 10 sports stories of 2021. (Leader file photo)

Editor’s note: Leader Publications has compiled a list of the top 10 sports stories this year. Here are stories 10 through six. Stories five through one will appear Wednesday, and the complete story will be in Saturday’s print editions.

DOWAGIAC — After a year of constant change due to COVID-19, 2021 was a bit smoother than its predecessor.

But there was still plenty of change in the past 12 months as coaches and athletic directors came and went at nearly every school in the Leader Publications coverage area.

Of the top 10 stories selected based on Google Analytics from leaderpub.com, six were about coaches resigning, being replaced, and a new athletic director at Niles. The remaining four stories covered the gamut from an Olympic Silver Medal for a Buchanan native to a pair of local football players helping Ferris State University to the school’s first Division 2 National Championships.

His resignation came on the day when Cassopolis Athletic Director Chad Gardner announced the Rangers would not make a run at another district championship after having to go into quarantine.

“It was just time,” Evans said. “I have been thinking about it. It has been 11 years. A lot of things change.” 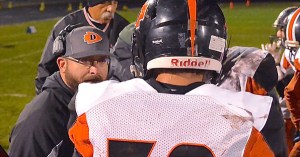 DOWAGIAC — Turning to its rich tradition, Dowagiac hired alum Duane Davis at a special meeting in June as its new varsity football coach.

Davis, who played for Bernard Thomas and was an assistant coach under Mike Stanger and Randy Brooks, replaces Brooks, who resigned earlier this year.

Davis will begin his 14th coaching football at Dowagiac. He has also coached Rocket Football and worked at various sub-varsity levels, including middle school, over those 14 years.

Davis said he did that because he understands changing coaches can be difficult for players.

“I was just trying to do the best thing possible for the kids,” Davis said. “I had been through it. I went through the transition of coach Thomas to coach Stanger. I know how tough that is for seniors. It is not easy, and I did not want them to lose anything. I reassured them I wasn’t going anywhere, whether I got the head coaching job or not.” 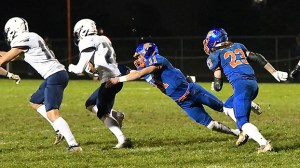 8. Something has to give in Division 4 Semifinals

EDWARDSBURG — Two of the highest-scoring teams in the state of Michigan squared off at Portage Northern High School Nov.19, with a trip to the Division 4 Football Finals hanging in the balance.

Hudsonville Unity Christian (12-0) and Edwardsburg (12-0) come into the Division 4 Semifinals, scoring a combined 1,324 yards through 12 games. The Crusaders, who hold the record for most points scores through 11 games in Michigan High School Athletic Association history, were trying to join the Eddies in the 700-point club.

Unity Christian would be the sixth team in state history to score at least 700 points in a single season. Edwardsburg scored 705 points in 2018 on its way to the Division 4 state championship.

Heading into semifinal clash of unbeatens, the Crusaders scored 693 points and the Eddies 628. 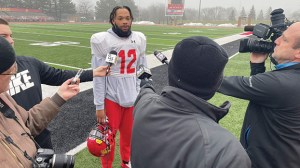 MCKINNEY, TX — A pair of former area high school football standouts are on the cusp of making history.

The 13-0 Bulldogs punched their ticket to the Division II national championship game with a 55-7 victory over Shepherd Dec. 11 in the semifinal and are preparing to face Valdosta State (Georgia) in the national title game Dec. 18, at the McKinney ISD Stadium in McKinney, Texas. The game was seen live on ESPNU.

Against Shepherd, Murphy had five tackles and two sacks, while Hunt-Thompson had a receiving and rushing touchdown.

The pair knows it will have to play well to defeat the 12-1 Blazers, who edged the Colorado School of Mines 34-31 in the other semifinal game. The game will be a rematch of the 2018 national championship game, which saw the Blazers eke out a 49-47 victory.

The Bulldogs defeated Valdosta State 58-17 for the championship. Hunt-Thompson scored a touchdown, and Murphy had seven tackles.

DOWAGIAC — When the 2021-22 school year ends, five teams will join forces to create a new conference in southwest Michigan.

The school boards from Dowagiac, Brandywine, Buchanan, Berrien Springs and Benton Harbor approved a motion at its regular meeting Dec. 13 that would allow their athletic directors the option to look at joining a new athletic league.

That other option was to join together to create a five-team league that will begin play in fall 2022.