Patricia A. Durben, of Edwardsburg 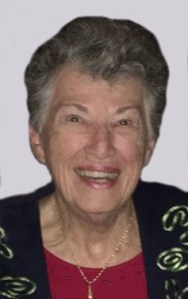 Patricia was born on June 21, 1936, to the late John and Corinne (Icks) Nicholson Sr.  She was also preceded in death by an infant daughter, a sister, Sarah (Sally) Mohr, and three brothers, John Nicholson Jr., Robert Nicholson and William Nicholson.

Pat graduated from Elkhart High School in 1954 and then from Valparaiso University in 1958.  She then took a position with The Elkhart Truth as a reporter for a year before moving to the South Bend Tribune where she also worked as a reporter from 1959 until 1964.

She was a former member of the South Bend Press Club and the Edwardsburg Booster Club.  A member of Trinity Lutheran Church, Pat also served as the Secretary/Treasurer of the Branch 460 Aid Association for Lutherans.  From 1989 until 2000, she was the group discussion leader for Life Light Bible Study at Trinity.  Pat also served as Elkhart’s Community Ambassador to Finland in 1960.

Visitation for Pat will be held on from 2 to 5 p.m. Sunday, Dec. 19, 2021, at the Hartzler-Gutermuth-Inman Funeral Home.  Friends may also call on Monday, December 20th from 9 am until the hour of the service at 10 a.m. at Trinity Lutheran Church. The Rev. Spencer Mielke and the Rev. Robert Schallhorn will officiate. Entombment will be at the Chapel of Hope mausoleum in Rice Cemetery.

Memorial contributions in memory of Patricia may be made to Trinity Lutheran School 30888 C.R. 6 Elkhart, IN 46514.

To leave the family an online condolence, please visit the funeral home website.